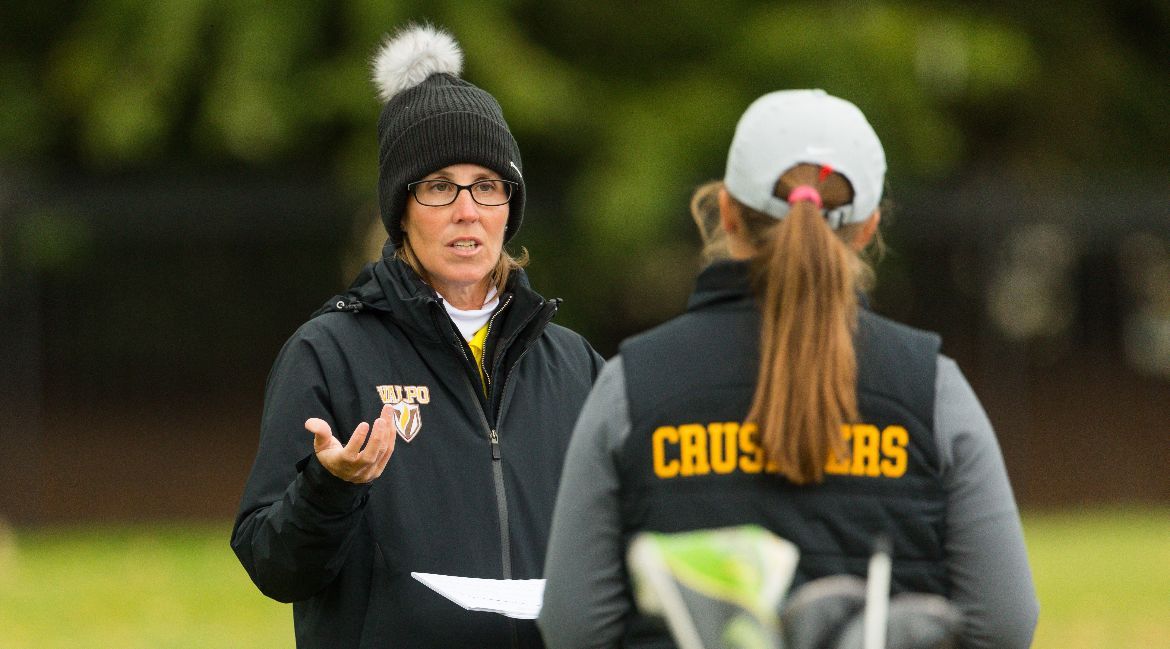 The Valparaiso University women’s golf team has announced that a quartet of incoming freshmen have signed to continue their academic and athletic careers at Valpo beginning with the 2021-2022 season.

“I think we have a really strong group of student-athletes who will bring a whole new level of hard work and competitiveness to our team,” McCoy said. “This is a group that will keep our program moving in the right direction.”

Keil is a four-time all-conference honoree and helped her team to conference championships in 2019 and 2020.

“I really loved Valpo’s home golf course,” Keil said. “A lot of schools don’t have courses as nice as Sand Creek with three 9s. It’s an amazing course. The atmosphere of the team seemed awesome. I wasn’t able to meet the team due to COVID recruiting rules, but the way practices are structured was appealing to me. The proximity to home was also a factor, as Valpo is less than two hours from my hometown, so I’ll be able to watch my younger brothers grow up and attend their sporting events.”

Keil qualified for state in 2019 and 2020 during a high school career that saw her finish as the conference medalist during the 2020 campaign, earning all-state honors. She has also played three years of varsity soccer and four years of varsity basketball.

“Madison had a very good summer,” McCoy said. “After talking with her and her parents, it became clear that she has a work ethic that our team really needs. She can serve as an example of how to work hard and be competitive. The competitive streak that Madison has as a basketball player also comes through in her golf game.”

Keil ranks in the top 10 percent of her class academically. She has an interest in pursing a nursing degree at Valpo. Away from athletics and academics, Keil enjoys buying clothes from stores and using her sewing skills to make them into something better.

“Adjusting to college, I know I’ll have to balance my golf and school schedules,” she said. “Keeping my grades up is a priority. Another adjustment will be that courses are much longer in college, so I’ll have to be hitting the ball farther. My short game is strong and I’ll bring a quiet leadership to the team, which is something I’ve always provided.”

Fay is a three-time Michigan High School Athletic Association (MHSAA) Division 2 First Team All-State selection (2018, 2019, 2020) and has finished in the top 10 at the state finals in each of the last three seasons.

“When I visited Valpo, I was very impressed with the feel of the campus,” Fay said. “Everyone I talked to was extremely nice and supportive. The smaller class sizes were an important factor in my decision.”

Fay comes from a legacy family, as her mother went to Valpo as did two of her aunts and uncles. The University’s Lutheran roots and her family’s positive experience on campus also played a role in her decision.

“Their Valpo experiences helped prepare them well for their futures,” Fay said. “I want to have that same experience and be prepared for my chosen field. As of now, I’m planning on studying bioengineering and Spanish. My family members have nothing but good things to say about their time at Valpo.”

A four-year varsity letter winner and two-year captain, Fay guided her team to three state championships (2017, 2018, 2019) and one state runner-up finish (2020) in her four years of high school. She was the regional medalist in 2019, earned all-conference accolades all four years and achieved first-team all-state status. In addition, Fay advanced to match play in the Golf Association of Michigan (GAM) Girls Junior Amateur.

“Anna’s family connection to Valparaiso University is one reason we started looking at her, but at the same time she is a very strong player,” McCoy said. “She had a great summer and is very solid and consistent with her game. She doesn’t have a lot of ups and downs. Her consistency is what stood out the most about her on the golf course.”

In the classroom, Fay owns a 4.1 grade point average and is an AP scholar with honors. She is a National Merit Scholarship Program Commended Student, is a member of National Honor Society and attended Forest Hills Northern High School in the Spanish Immersion Program.

Fay has also competed in varsity tennis and basketball, helping her basketball team to a 2020 conference championship. In tennis, she finished fourth in doubles at the regional championship and was a state semifinalist as a freshman in 2018. She also helped her team place fourth in the MHSAA Division 2 state finals in 2018. The multi-faceted Fay is also a Michael Sadler Foundation Gamechanger Ambassador, has been a member of student government and is involved in her church’s youth group.

“Coach McCoy was great when I talked to her on the phone,” Fay said. “She was encouraging and is doing great things for the program. I’m excited to be a part of it and have a chance to play for Valpo. I would say my long game and tee shots are definitely the strengths of my game. Short game is something I’ve put a lot of work into the last couple years. I’m excited to show how I can compete at the collegiate level and bring a competitive nature to our team.”

Schreiner finished second at state this fall as an individual in addition to helping Summit to a team championship. It marked the first state title in girls golf in program history.

A four-time state qualifier, Schreiner earned academic all-state following her junior season and is a member of National Honor Society. The three-year honor roll member was also an academic leader as a junior.

“Katie has been a very pleasant surprise,” McCoy said. “She reached out to me over the summer and her scores were OK, but as she progressed through her senior year this fall, she ended up finishing as the state runner-up. It was fun to watch her grow and develop. She’s put a lot of time and effort into her golf game and made a huge improvement. We’re excited about bringing that work ethic and determination into our program.”

Schreiner was particularly interested in the internship experiences offered by the Valpo College of Engineering and hopes to perhaps intern at Disney by the end of her college tenure.

“I expect the transition to college to be fairly difficult,” Schreiner said. “My time is going to be completely filled, especially with a challenging major. Golf is going to be more serious than it has been in high school, so I’m excited to compete with and against people who take it as seriously as I do. I’m really competitive and look forward to being a part of a team where we can push each other to be better.”

Brunner earned first team all-Northern Lakes Conference accolades all four year of high school and has garnered team Most Valuable Player honors in each of her first three seasons. She twice earned the Wawasee Warrior Award. She is another Valpo legacy student-athlete as her grandfather and uncle both competed in intercollegiate athletics at Valpo. Her grandfather Tom Brunner was a member of the track & field program, while her uncle Brian O’Connor played for the baseball team.

“I really liked Valpo because I thought the campus was beautiful during my visit,” Brunner said. “I liked Coach McCoy a lot and the team plays on an excellent golf course. All of that factored into my decision. Both my grandpa and uncle enjoyed going to school at Valpo, and they loved the feeling of a smaller campus where you get to know everyone very well.”

Brunner set team nine- and 18-hole scoring records in 2020 while helping her team to the first NLC championship in school history. She shot a 74 at the sectional to finish as the individual co-medalist before qualifying for regionals for the third time in her prep career. Brunner helped the team to its first state appearance in school history as a senior while garnering academic all-state honors and being named Fall Kiwanis Female Athlete of the Season in Elkhart County.

“Belle was a last-minute standout,” McCoy said. “She played golf all summer and has a very strong work ethic. From what I see looking at her fall scores and from talking to her swing coach, it’s clear that she’s willing to put in the work that it takes to be successful at the college level.”

Away from golf, Brunner is involved in student council, the student newspaper and National Honor Society. She also spent two years on the varsity swim team and owns a cumulative grade point average of 3.908.

“I’m excited to meet everyone on the team,” Brunner said. “I think I’ll get along with everyone very well. I’m looking forward to competing more and doing so against higher level players. Coach McCoy seems very nice and positive, and I’m excited to be a part of helping her build the program.”