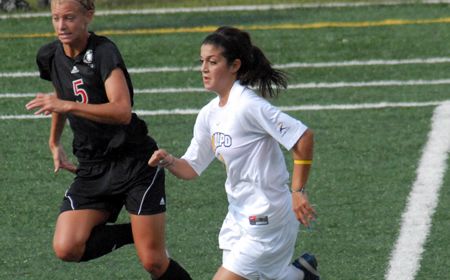 Freshman Luisa Desario (Bartlett, Ill./Bartlett H.S.) scored her first two collegiate goals and Rachel Hoaglin (Lakeville, Minn./Academy of Holy Angels H.S.) added the match-winner in the final with less than 14 minutes remaining in regulation as Valparaiso defeated Ball State 3-2 on Thursday evening at the Varsity Soccer Complex in West Lafayette, Ind. in the opening round of the Boilermaker Challenge Cup hosted by Purdue.

“I’m proud of our team because we executed what we wanted to do against a very high line from BallState,” said head coach John Marovich.

Valpo struck first just under 20 minutes into the contest.  Jackie Kondratko (Granger, Ind./Penn H.S.) sent a long lead pass ahead to Trisha Wladecki (Avon Lake, Ohio/Avon Lake H.S.).  Wladecki sent a cross to Desario who found the back of the net from 15 yards out to put the Crusaders on top 1-0.

Both teams had seven shots in the opening half, but it was Valpo that had the better chances, forcing Cardinals’ goalkeeper Nicole Wood to make four saves in the opening 45 minutes to keep the Brown and Gold’s lead at just one heading into intermission.

Ball State (0-3) came out quickly after the break, scoring twice in the first eight minutes to take the lead.  Christine Concannon took a feed from Jackie Eft at the top of the penalty area and just scored over the outstretched  arms of Crusader netminder Mele Cabral (Boulder, Colo./Fairview H.S.) just 3:45 into the half.

Three-and-a-half minutes later, the Cardinals took the lead.  Megan Ridley took a pass from Eft in the middle of the penalty area to tally her first goal of the season and put Ball State up 2-1.

Desario’s second tally of the match tied the contest at two with just over 20 minutes remaining.  Kondratko sent a long ball from midfield to Desario, who outran the defender and beat Wood one-on-one.

“I thought we had outstanding performances from Desario and (Laura) Romberg (Vernon Hills, Ill./Vernon Hills H.S.),” Marovich said.  “Their efforts really hurt Ball State – Luisa with her pace and Romberg with her distribution.”

Hoaglin added her second goal of the year with 13:14 to play to give Valpo the victory.  After Kondratko had won the end line, the ball bounced around in the box, deflecting off of several players before Hoaglin finished it off for her first career match-winner.

“I think our persistence throughout the match is what allowed us to score three goals today and win the match,” added Marovich.  “I think it shows the character of this group to not panic once we gave up the two goals. We had the confidence to continue to do what we asked them to do and it paid off in the end. The best part of today’s match is we found our character and that character is something I'm extremely impressed with.”

Valpo outshot Ball State 12-4 in the second half to finish with a 19-11 advantage in the match, and forced Wood to make seven total saves.  Cabral finished the night with two stops to earn the victory for the Crusaders.

Valparaiso (2-3) will look for its third straight victory on Saturday evening when the Crusaders face the host Boilermakers.  Kickoff against #14 Purdue is set for 4:30 p.m. CDT with all the action carried live online through www.valpoathletics.com.

Match Notes: Valpo leads the all-time series with Ball State 4-1 and has won two straight meetings … this was Valpo’s first neutral site match since November 2, 2006 when the Crusaders played Western Illinois in the Mid-Continent Conference Tournament semifinals in Rochester, Mich. … five of Valpo’s six goals this season have been scored by freshmen … Cabral earned an assist on Desario’s second goal, her first collegiate assist … Kondratko now has three assists on the season and 20 career points.