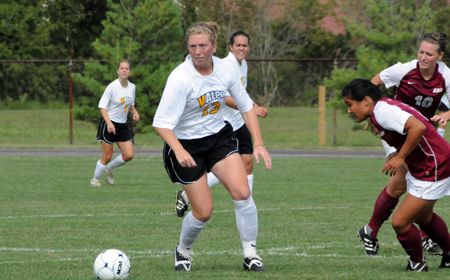 Valparaiso’s women’s soccer team wrapped up the non-conference portion of the 2010 schedule on Friday evening, battling IndianaState to a 1-1 double-overtime draw at Memorial Stadium in Terre Haute, Ind.

“I thought we battled hard tonight and earned the draw and were able to finish the non-conference part of the schedule 4-3-3,” head coach John Marovich said.  “We have learned a great deal during the first half of the season and it has us prepared for conference play.”

The Sycamores took the lead just 1:20 into the match as Alison Gasparovich’s shot from the top of the box found the back of the net for her sixth goal of the season.

Valpo answered at the 14:29 mark as Brooke Henderson (Westlake, Ohio/Westlake H.S.) drew a foul inside the penalty area.  Casey Pedersen (Northville, Mich./Mercy H.S.) converted the penalty kick for her second goal of the season, tying the match at one.

The match stayed even into halftime, despite Indiana State outshooting Valpo 5-2 in the period.   The Crusaders had the better of the chances in the second half, firing six shots, three of which were turned away by goalkeeper Emily Lahay.

Indiana State (6-3-1) had all five shots in the extra session though, but Kristen Manski (Saint Charles, Ill./North H.S.) made one save in each overtime period on her way to finishing with five saves for the match.

The Sycamores finished with a 15-8 shot advantage and held an 8-3 edge in corner kick opportunities.

Match Notes: Valpo leads the all-time series 7-2-2 but the two sides have battled to draws each of the last two seasons … Tracy Roos (Centennial, Colo./Cherry Creek H.S.) started her 50th consecutive match since arriving at Valpo … three ties in a season match a school record with the 2003, 2006, and 2008 squads … Pedersen’s goal gives her six points on the year, second most on the squad.