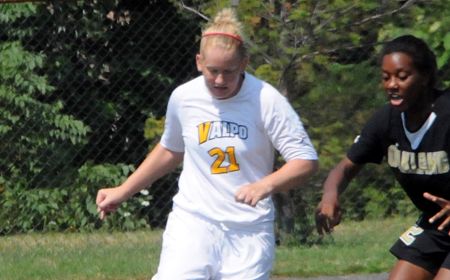 Valparaiso outshot Loyola (Chicago) 18-9 on Friday afternoon at Eastgate Field, but it was the Ramblers that pushed a goal across midway through the second half on the way to a 1-0 victory over the Crusaders.

Maggie Doe’s shot from the top of the box found the upper left corner of the goal at the 68:01 mark for an unassisted goal, in what would prove to be the difference in the match.

Valparaiso controlled the play offensively, outshooting Loyola (4-8, 2-0 Horizon) 18-9 on the afternoon, and had 11 corner kick opportunities compared to the Ramblers one, but could not find the equalizer.

“I thought we played well today,” head coach John Marovich said.  “We did everything we needed to do except score the goal.”

Luisa Desario (Bartlett, Ill./Bartlett H.S.) nearly put Valpo on top less than a minute into the match, as her shot attempt hit the crossbar.

Tara Ellis (Portage, Ind./Portage H.S.) had another chance to give the Crusaders the lead just before intermission, but hit the post with her attempt and the two sides went into intermission scoreless despite Valpo’s 8-4 shot edge and seven corner kicks in the opening 45 minutes.

After Loyola scored, Valpo had several other chances to tie in the second half.  Rachel Hoaglin (Lakeville, Minn./Academy of Holy Angels H.S.) had a shot in the box that Rambler netminder Katie Groesch made a diving save on.  Hoaglin had two more chances in the final five minutes, sending a header high and just missing the inside of the right post with 17 seconds remaining.

“We had 18 shots, sustained pressure, and handled the match for 90 minutes,” Marovich added.  “We made one mistake and got beat by it.”

Kristen Manski (Saint Charles, Ill./North H.S.) made two saves in goal for Valpo while Groesch made three stops for the Ramblers on the day.

Valparaiso (4-5-3, 0-2) will return to the road on Sunday to begin its final three-match road trip of the season, heading south to Indianapolis to battle Butler.  Kickoff is set for 12 p.m. CDT.

Match Notes: Hoaglin and Brooke Henderson (Westlake, Ohio/Westlake H.S.) each had a team-high four shots for the match … five of Hoaglin’s 10 shots this season have been on net, including two on Friday … Loyola leads the all-time series 14-4 and has won nine straight.