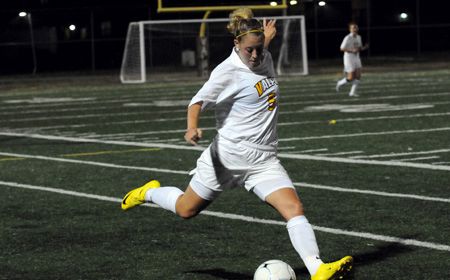 While Valparaiso out-shot Cleveland State on the day, the Vikings scored just before halftime and then added an insurance tally late in the second half as the Crusaders fell, 2-0, Friday afternoon at Eastgate Field.

“I thought we had some good chances to score today,” said Crusader head coach John Marovich.  “Tara Ellis (Portage, Ind./Portage) created a great chance we couldn't finish on.  Then Cleveland State scored late in the first half and we ended up chasing the game, something that we haven't been good at throughout this season.”

The Crusaders and Vikings each tallied five shot attempts in the opening 45 minutes, with Valpo pushing the tempo in the latter stages of the half, putting three shots on goal in a three-minute stretch.  But CSU's Kelly Zinkiewich stopped all three shots, and the Vikings got on the board in the 43rd minute.  Jessica Bound set a cross into the six-yard box from the end line, where Natalie Daniels outjumped everyone and headed the ball into the back of the net for the game's opening tally.

Valpo controlled the game in the second half, out-shooting Cleveland State by an 8-3 count and maintaining possession for the better part of the half in its offensive end.  But the Crusaders couldn't push the tying marker across the goal line, as Zinkiewich made two more saves and other efforts were just outside the goal frame.

Then, the Vikings got their second goal in the 76th minute after a corner kick.  Taylor Vidovic corralled the ball inside the 18 and sent it towards net, where Sylvia Olsby took it on the edge of the six-yard box and sent it through traffic into the left side of the net for the 2-0 margin.

Valparaiso closed the game with a 13-8 edge in shot attempts and placed five shots on goal to the Vikings' four.  Kristen Manski (Saint Charles, Ill./North) made a pair of saves in net for the Crusaders, while Zinkiewich stopped five shots over the course of the game.  Cleveland State (9-6-2, 5-2-0 Horizon) held a 4-2 edge in corner kicks.  Valpo sophomore Trisha Wladecki (Avon Lake, Ohio/Avon Lake) led the Crusaders with three shot attempts.

“We all wish we could score that one goal to get us over the top, but it just hasn't happened for us yet,” said Marovich.  “We're going to come out professionally on Sunday against Youngstown State and look to play a solid and strong game to close out the year.”

Valparaiso (5-8-4, 1-5-1 Horizon) closes out the regular season at Eastgate Field on Sunday afternoon as it faces off with Youngstown State.  Kickoff is set for 1 p.m., with Senior Day ceremonies taking place prior to the game.  All the action can be heard live on WVUR, 95.1 FM, Valparaiso and online at www.valpoathletics.com, which will also have a link for live stats.