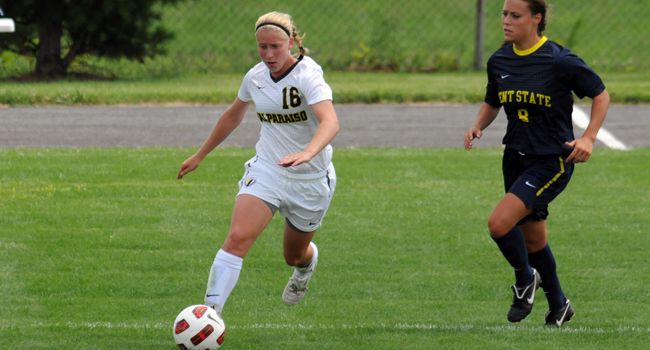 Valparaiso wrapped up the exhibition portion of the 2011 schedule on Sunday afternoon, suffering a 1-0 setback to Kent State at Eastgate Field.

“I thought we played a much better match than we did on Friday,” head coach John Marovich said afterwards.  “We were still inconsistent though.  We got a chance to see a lot of different people play and found we have a lot of flexibility with this group.”

Jaclyn Dutton scored the lone goal of the match for the Golden Flashes with just under 15 minutes to play before intermission, firing a shot from the top of the box into the right corner of the goal.

Valpo had several chances, outshooting Kent State 11-9 for the match, including a 4-2 advantage on goal.  The Crusaders won nine corner kicks, including five in the second half, but were unable to find the back of the net.

“Even though we had nine corners, I thought we were more effective with them than Friday,” Marovich added.  “They made a couple of big saves.  We had lots of good looks but just have to finish.”

Valparaiso will open the 2011 regular season under the lights on Friday evening hosting Morehead State at Brown Field.  Kickoff is set for 7:30 p.m.