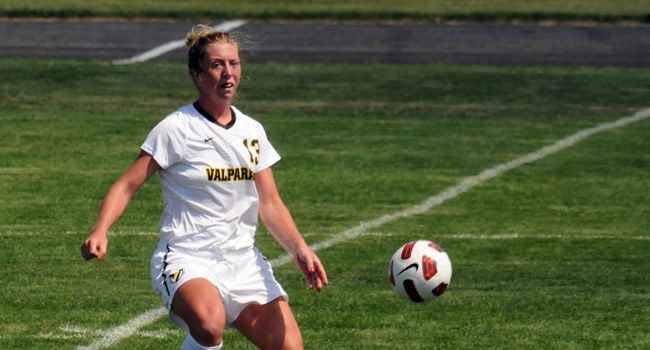 Valparaiso wrapped up play at the Liberty Invitational on Sunday afternoon, dropping a 3-1 match to the host Flames of Liberty at Osborne Stadium in Lynchburg, Va.

Casey Pedersen (Northville, Mich./Mercy H.S.) scored her second goal of the season for Valpo’s lone tally with 21:29 to play in the match.  The fifth-year senior knocked home a rebound off of a Laura Romberg (Vernon Hills, Ill./Vernon Hills H.S.) shot which was initially saved by the Flames defense.

Valpo started strong with three corner kick opportunities in the first four minutes of the match and Kelsey Draper (Perrysburg, Ohio/Perrysburg H.S.) registered a shot on goal, only to be turned aside by Liberty netminder Karen Blocker.

Liberty (1-2-1) scored first 11:30 into the contest as Laura Nyholt tapped in a rebound of an Ariana Espinoza shot and the Flames went into the locker room with a 1-0 lead.

“We gave away an early goal and had to chase the game,” head coach John Marovich said.  “It made things difficult.”

The Flames added to the lead just 2:08 out of the break as Kelly Henion took a feed from Silvia Betancourt and scored into the right corner of the goal.  Megan Warner tallied Liberty’s final goal at the 59:38 mark after receiving a pass from Henion.

“We pressed in the second half and gave away another goal,” Marovich added.  “This was a good lesson for us about falling behind early.”

Pedersen’s tally then brought Valpo within two, which proved to be the match’s final margin.

“I was pleased that we battled all the way to the end,” Marovich concluded.  “We had a couple of good chances even after Casey’s goal.  If we get one more it could have made the final 15 minutes more interesting.”

Liberty outshot Valpo 17-8 on the afternoon, including an 11-5 advantage on goal.  Kristen Manski (Saint Charles, Ill./North H.S.) made a career-high eight saves for the Crusaders while Blocker registered three stops for the Flames.  The Brown and Gold also had 12 corner kick opportunities while Liberty had eight.

Valparaiso (2-3) will return to the pitch next Friday evening, continuing its four-match road trip in Indianapolis, Ind. battling the Jaguars of IUPUI.  Kickoff is set for 6 p.m. CDT.

Match Notes: The all-time series is tied at one between Valpo and Liberty … Pedersen’s goal was the sixth of her career … she now has 14 career points … Romberg’s assist was her first of the season and second of her career … Erika Schoemann (Calgary, Alberta/Saint Mary’s H.S.) made her collegiate debut for the Crusaders on Sunday … Brooke Henderson (Westlake, Ohio/Westlake H.S.) had a team-high three shots for Valpo in the match.