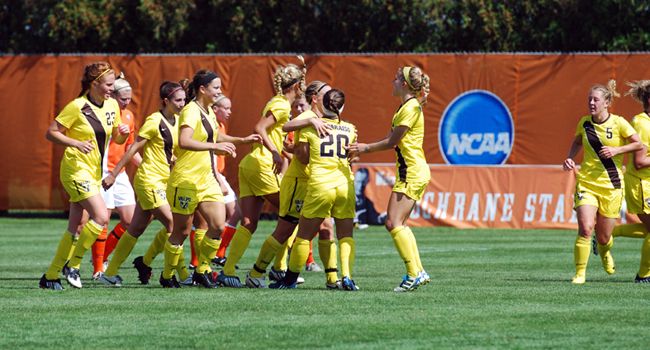 With the victory, Valpo (5-3-1) moves a season-high two games over the .500 mark and has won three straight contests.

The Crusaders found the back of the net quickly as Tracy Roos (Centennial, Colo./Cherry Creek H.S.) sent a cross into the box which Rachel Hoaglin (Lakeville, Minn./Academy of Holy Angels H.S.) converted and beat Becca Ison for her team-leading fifth goal of the season just 8:47 into the contest.  Hoaglin has now scored in each of Valpo’s last four matches.

“It’s a big deal that we scored early in the match,” head coach John Marovich said.  “We did a good job of keeping possession and had a lot of good connecting passes today.”

Valpo made it 3-0 before intermission.  Trisha Wladecki (Avon Lake, Ohio/Avon Lake H.S.) took a corner kick that Laura Romberg (Vernon Hills, Ill./Vernon Hills H.S.) got a head on.  Kelsey Draper (Perrysburg, Ohio/Perrysburg H.S.), playing less than 10 miles from her hometown, collected the ball and drove it from the top of the 18 into the right side of the goal for her first collegiate goal.

The Crusaders outshot the Falcons 6-2 in the opening stanza and kept Bowling Green (3-6) from registering a shot on goal.

“To start the second half we figured Bowling Green would come out with pressure,” Marovich added.  “We did a pretty good job dealing with that.”

Katie Gratzianna (Elmhurst, Ill./York H.S.) added her first collegiate tally with just 6:27 to play heading home a ball over Ison that Becky Clever (Cincinnati, Ohio/Maderia H.S.) had chipped towards the back post.

“It was great to see everyone contribute today,” Marovich concluded.  “Everyone that saw the field did something positive.”

Valpo finished the match outshooting Bowling Green 11-8.  Ison made three saves for the Falcons in goal.  The Crusaders also had eight corner kick opportunities, including six in the opening 45 minutes of action.

Valparaiso (5-3-1), unbeaten in its last four matches, will host the Crusader Classic next weekend.  Friday’s action begins at 5 p.m. at Brown Field as IUPUI faces Air Force before the Crusaders battle Campbell at 7:30 p.m.

Match Notes: This was Valpo’s first ever win against Bowling Green in four tries … Hoaglin’s match-winner was her third of the season, tied for sixth on the all-time single season charts … Hoaglin’s five match-winners all-time tie her for eighth with Lisa Springs (1998-2001) on the career list … Hoaglin also tied Jackie Kondratko (2006-2009) for seventh all-time on the career goals list with 13 and pulled her even with Lori Johnson (2005-2008) for ninth on the career points list with 32 … Desario’s goal was the 11th of her career, tying her for 10th on the all-time list … Manski’s shutout was the eighth of her career, placing her third all alone on the career charts … Clever made her first appearance of the season and the senior collected her first career assist … Roos’ assist was her first point of the year.