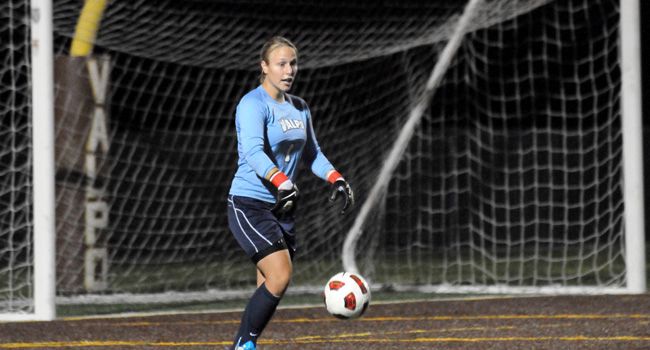 Valparaiso battled the 12th ranked team in the country for 90 minutes on Wednesday evening, but a pair of second half goals proved to be the difference as the University of Wisconsin-Milwaukee defeated the Crusaders 2-0 at Engelmann Field in Milwaukee, Wis.

“For us to go on the road and compete in this environment is a good test for us,” head coach John Marovich said afterwards.  “We’re going to become a better team because of matches like this not backing down against a quality opponent.”

The two schools played a scoreless opening 45 minutes despite the host Panthers outshooting Valpo 8-3 in the period.  Kristen Manski (Saint Charles, Ill./North H.S.) made four saves in the half to keep the Crusaders tied at the break.

Milwaukee (12-1, 4-0 Horizon) took the lead just 1:30 into the second half.  Kelsey Holbert picked up a loose ball in the box and scored her first goal of the season to put the Panthers on the scoreboard with Keara Thompson picking up her ninth assist of the year.

The Crusaders continued to fight, firing off six shots in the second half while forcing Milwaukee goalkeeper Jamie Forbes to make a pair of saves to keep the Brown and Gold off of the scoreboard.

“Milwaukee puts you under a lot of pressure, and I was pleased we were able to work out of that pressure by keeping the ball,” Marovich added.  “Because of facing that pressure, we’ll be able to handle the ball better in the future.”

The Panthers added an insurance goal at the 76:21 mark.  Following a Crusader foul, Thompson found the back of the net from just outside the top of the penalty area on a free kick.

Valpo could not find the back of the net the rest of the way, suffering its first Horizon League setback of the season.

Valparaiso (6-5-2, 2-1) will return home on Sunday afternoon to host Cleveland State.  Kickoff is set for 1 p.m. at Eastgate Field.

Match Notes: Milwaukee has won all 13 meetings between the two schools … Rachel Hoaglin (Lakeville, Minn./Academy of Holy Angels H.S.) led Valpo with three shot attempts … Luisa Desario (Bartlett, Ill./Bartlett H.S.) had two of Valpo’s three shots on goal … the Crusaders were held without a corner kick in the match while the Panthers had five.