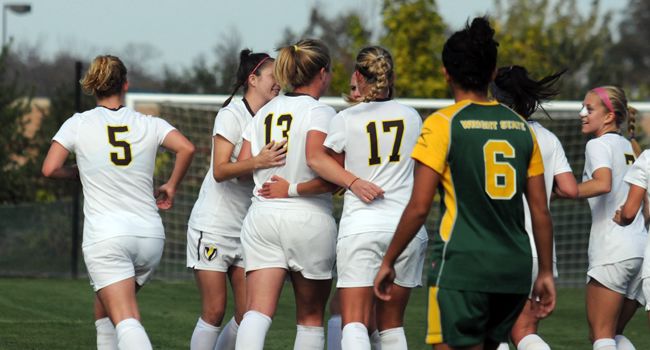 A goal with just 2:35 remaining in regulation allowed Wright State to tie the match on Sunday afternoon as Valparaiso and the Raiders battled to a 2-2 double-overtime draw on Senior Day for the Crusaders at Eastgate Field.

“It’s disappointing to give a goal away that late in the game,” Valpo head coach John Marovich said after the match.  “We need to do a better job of killing off the end of the game.”

Wright State (8-6-3, 3-2-2 Horizon) took the early lead just 57 seconds into the contest as Bekah Bonny took a cross from I’esha King on the right side and beat Kristen Manski (Saint Charles, Ill./North H.S.) from inside of the six to make it 1-0 Raiders.

Valpo tied the match at the seven minute mark as Casey Pedersen (Northville, Mich./Mercy H.S.) converted a penalty kick after the Crusaders drew a foul in the penalty area.  For the fifth-year senior, it was her third goal of the season and seventh of her Valpo career.

Luisa Desario (Bartlett, Ill./Bartlett H.S.) put the Crusaders on top with 9:28 remaining before break, taking a pass from Pedersen and beating Raider netminder Brooke McCurdy one-on-one in the box to make it 2-1 Valpo.

The match remained that way into intermission and throughout most of the second half before Allie Metzler headed in a Brittany Persaud free kick for the match-tying goal.

“We were too content to just defend late and we got punished,” Marovich added.

Valpo had a chance in the final two minutes of regulation to win the contest, but Katie Gratzianna’s (Elmhurst, Ill./York H.S.) shot ricocheted off of the post and stayed out.

Wright State outshot the Crusaders 20-16, including 4-1 during overtime.  Manski made six saves for the Crusaders while McCurdy finished with two for the Raiders.

“We put ourselves in a position to get a bye in the upcoming tournament with a win and we didn’t get it done,” Marovich concluded.  “We have got to move on to the next match on Friday and get those three points to secure the third seed.”

Valparaiso (8-6-3, 4-2-1) will close out the regular season on Friday afternoon against Youngstown State.  Kickoff is set for 2 p.m. CDT in Youngstown, Ohio.

Match Notes: Pedersen along with Tracy Roos (Centennial, Colo./Cherry Creek H.S.), Laura Romberg (Vernon Hills, Ill./Vernon Hills H.S.), Sammy Olson (Buffalo Grove, Ill./Buffalo Grove H.S.), Mikki Nuccio (Ortonville, Mich./Brandon H.S.), Becky Clever (Cincinnati, Ohio/Maderia H.S.), and Brooke Henderson (Westlake, Ohio/Westlake H.S.) were all honored prior to the match as the class of 2011 … Olson made her first appearance of the season, starting after being injured all season long … Desario’s goal was her 13th of her career, tied for eighth on the career charts … Desario now has 33 career points, tied for seventh all-time … Valpo has tied its last six overtime matches … Valpo is 5-0-4 in its last nine Senior Day matches … the Crusaders have assured themselves a home match in the upcoming Horizon League Tournament on Nov. 1.