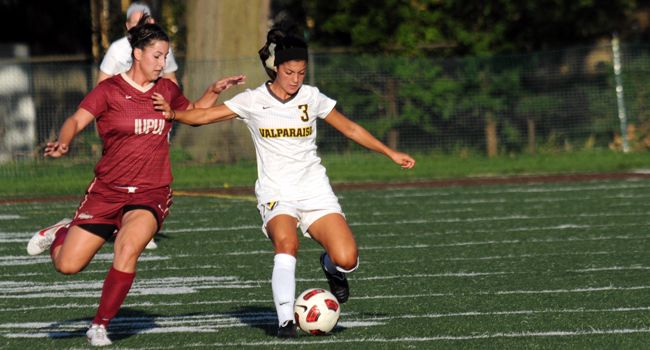 On a rainy Sunday afternoon in Chicago, a seventh-minute strike proved to be the difference, as the Valparaiso women’s soccer team dropped a 1-0 decision at DePaul.

“We had moments in the match today, but an early mistake caused us to have to chase the game a bit,” said Crusader head coach John Marovich.  “Overall, it isn’t the result we wanted, but the lessons from this game will help our team grow.”

The first shot of the game proved to be the decisive one, as the Blue Demons struck in the seventh minute.  A combination play off a free kick got the ball to the foot of Kelly Blumberg, whose shot from just outside the box found its way along the ground inside the far post for the game’s lone goal.

It was a game of few offensive opportunities, as Valpo garnered just five shot opportunities, while the Blue Demons posted just seven shot attempts.  The Crusaders’ lone shot on goal came off the foot of senior Luisa Desario (Bartlett, Ill./Bartlett) in the 38th minute, which was saved by DePaul goalkeeper Megan Pyrz.  DePaul’s only other shot on frame came early in the second half, as junior goalkeeper Kristen Manski (Saint Charles, Ill./North) saved an attempt from Rachel Pitman.

Valparaiso (2-1-1) hits the road again next Sunday, September 2 as the Crusaders travel to Iowa City, Iowa to take on the Iowa Hawkeyes.  Live stats for the match will be available through www.valpoathletics.com.