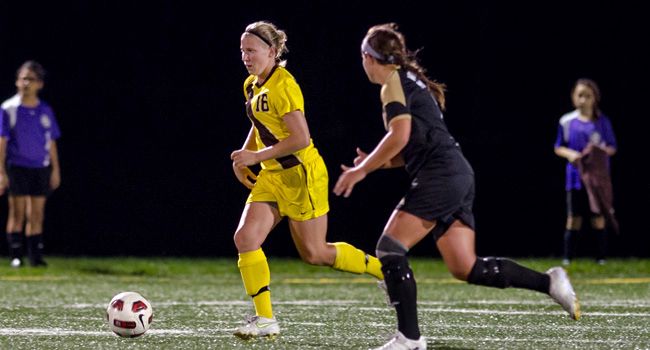 This Week in Crusader Soccer: The Valparaiso women’s soccer team ventures to California this weekend to take on a pair of opponents from the West Coast Conference. The Crusaders will play at San Francisco on Friday evening before facing off with Saint Mary’s on Sunday afternoon.

Previously: Freshman Rita Craven made her first career goal a golden one, tallying less than two minutes into extra time as Valparaiso posted its third straight shutout with a 1-0 victory over IPFW Sunday evening in Fort Wayne, Ind. The Crusaders have now won three consecutive games.

The Road Ahead: The Horizon League slate begins on the road next Friday, Sept. 28 at Cleveland State. The Crusaders then return home for three consecutive matches, starting with a league contest against Milwaukee on Wednesday, Oct. 3.

Following the Crusaders: Both of this weekend’s matches will have live stats available through www.valpoathletics.com. In addition, video is available for a fee for both matches through the respective host institutions’ websites.

Head Coach John Marovich: John Marovich holds a 39-31-15 record both overall and with Valpo in his fifth season at the helm of the Brown and Gold. Just the third head coach in program history, Marovich has the best winning percentage (.547) ever at Valpo, and ranks second in total victories.

Series Notes: The Crusaders have played Saint Mary’s on one prior occasion, on their previous trip to California in 2007, when the Gaels downed Valpo 1-0 in extra time. Valpo has never faced San Francisco in women’s soccer, as the Crusaders played Pacific on the other end of their California swing in 2007.

Scouting the Opposition: San Francisco enters Friday’s night battle at 4-3-3 on the season, most recently coming off of a 1-0 victory over UC Riverside. Mackenzie Krieser has scored five of the Dons’ 13 goals on the season, while Madalyn Schiffel has played every minute in goal and owns a 1.12 GAA. Saint Mary’s is 5-3-1 on the season and has earned decisions in four straight games, with a Friday game against Pacific prior to Sunday’s meeting with the Crusaders. Seven different players have combined for 10 goals on the year, while Khayla Jones has seen the majority of time in goal and owns a 0.60 GAA.

Keeping the Clean Sheets: Valpo registered its third straight shutout with the 1-0 overtime blanking of IPFW on Sunday, the second time in the last two seasons the Crusaders have posted three straight clean sheets. Junior goalkeeper Kristen Manski has been between the pipes for all three during this streak and five total this year, tops in the Horizon League and already tied for sixth in a single season in Valpo history.

Manski Earns League Weekly Honors: Manski was named the Horizon League Defensive Player of the Week on Sept. 10, her first career weekly honor, after posting a pair of shutouts between the pipes. Manski stopped six shots in the win over Western Michigan and made a pair of saves against Bowling Green.

Golden Goal for Craven: Freshman Rita Craven made her first career goal a memorable one, as she tallied the match-winner in the overtime win over the Mastodons last Sunday. Three of the four goals scored by Crusader freshmen so far this year have been either match-winning or tying tallies, as Sarrah Ludwig earned the match-winner versus Bowling Green and knotted up late in the draw with Kent State.

Winning in Extra Time: Valpo’s win over IPFW was its first in extra time since Oct. 11, 2009, as entering Sunday’s game, Valpo had played 12 overtime games since the start of the 2010 season without earning a victory, drawing 11 times and losing once. The win also extended the Crusaders’ impressive record of earning results when going to extra time, as Valpo is now 9-4-21 in its last 34 overtime games, dating back to the start of the 2004 campaign.

Ellis Contributes Offensively: Entering two weekends ago, junior Tara Ellis had not recorded a point in her Crusader career, but she turned that around in a hurry in the two Valpo wins. Ellis picked up the match-winning goal against Western Michigan on Friday on a direct free kick late in the first half, and then on Sunday, registered a pair of assists off of corner kicks for a four-point weekend. Ellis’ two-assist game was Valpo’s first multi-assist game since Casey Pedersen picked up a pair of helpers against Eastern Michigan on Sept. 10, 2010.

Lytle On the Attack: Senior defender Janine Lytle, who has sat on the bench for just 31 minutes in her career, entered Valpo’s showdown with Bowling Green with three goals and three assists to her credit through her first three seasons. But the matchup with the Falcons marked the first time Lytle was part of multiple goals in the same game. The senior nodded home an insurance goal with her head off a corner in the 81st minute against BGSU, and picked up an assist when a later header was saved, but the rebound was put away in the 84th minute.

Desario Picks Up Another Goal: The first Crusader to score multiple goals on the season, senior Luisa Desario found the back of the net for the third time in 2012 with an insurance goal in the win over Western Michigan. Desario, who picked up the match-winning goal in the season opener against IUPUI and also scored against Iowa, continues her march up the Crusader career charts in a number of categories, as she is now alone in fourth in career points (41), fifth in career goals (17) and tied for fifth in match-winning goals (6).