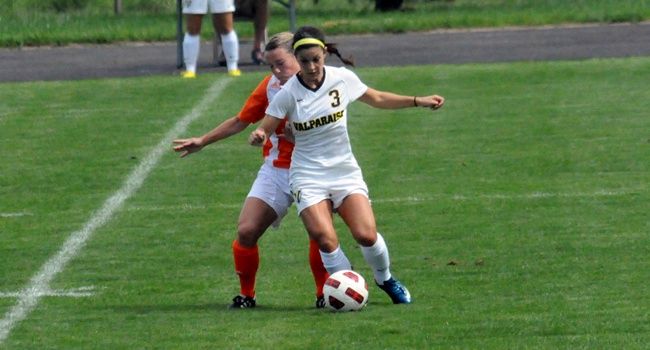 First-half goals by seniors Luisa Desario (Bartlett, Ill./Bartlett) and Rachel Hoaglin (Lakeville, Minn./Academy of Holy Angels) were more than enough for the Valparaiso women’s soccer team on Friday evening, as the Crusaders started out Horizon League play with a 2-1 victory at Cleveland State.

Desario broke the seal on the scoreboard in the 33rd minute, registering an unassisted tally in the 33rd minute.  The senior beat her defender just outside the box on the left wing and sent a shot past CSU goalkeeper Becca Coleman inside the far post to give Valpo a 1-0 lead.  Desario’s fourth goal of the season gives her 18 career goals, tied for fourth in Crusader history.

It looked like the game would remain at 1-0 Crusaders into the halftime break, but Hoaglin would have none of that.  The senior received a pass from freshman Rita Craven (Frankfort, Ill./Lincoln-Way North) at the top of the box with the clock winding down on the half.  Hoaglin turned and fired off a last-second shot that went through Coleman’s hands and into the back of the net with one second remaining in the opening stanza, giving Valpo a 2-0 lead at the intermission.  Hoaglin’s goal was the 15th of her career, tying her for sixth all-time at Valpo.

The Vikings sliced the margin in half in the 79th minute, as a quick counter-attack led to a goal by CSU’s Vickie Havas.  Cleveland State pushed forward in the final 10 minutes looking for the equalizer, but Valpo goalkeeper Kristen Manski (Saint Charles, Ill./North) made a pair of stops, including one with a minute to play, to ensure the Crusaders would take three points from the opener.

Manski ended the night with three saves, while Coleman and Sarah Wood, who entered at halftime, each stopped one shot for Cleveland State (3-8-0, 0-2-0 HL).  Valpo enjoyed a slight 10-8 advantage in shot attempts and attempted four corner kicks to CSU’s one.

Valparaiso (7-3-1, 1-0-0 HL) closes out its four-game road trip with three wins and just one loss, and now returns home for three consecutive matches.  The first fixture comes at Eastgate Field next Wednesday, Oct. 3 as the Crusaders host defending HL champion Milwaukee at 4 p.m.  The game will be broadcast live on WVUR (95.1 FM, Valparaiso) and online at www.valpoathletics.com, which will also have a link for live stats.