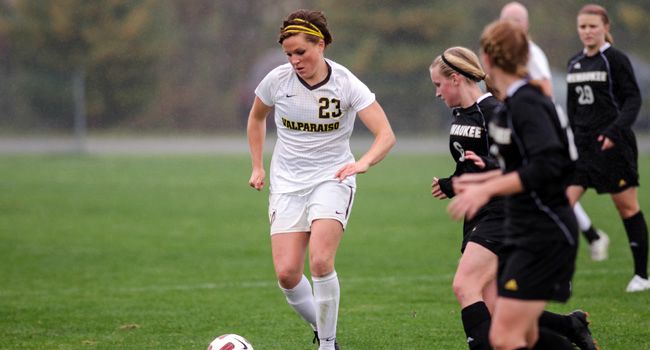 This Week in Crusader Soccer: The Valparaiso women’s soccer team closes out the 2012 regular season home schedule with a pair of key Horizon League matches at Eastgate Field this week. The Crusaders welcome Loyola on Wednesday before celebrating senior day on Saturday against Youngstown State.

Previously: Valpo earned a point on the road in league play on Sunday afternoon, as the Crusaders traveled to Wright State and played the Raiders to a scoreless draw. Kristen Manski was credited with a career-best 13 saves as she matched the Crusader career shutout record.

The Road Ahead: The Crusaders close out the regular season on Saturday afternoon, Oct. 27 as they travel to Green Bay for a 1 p.m. kickoff. If Valpo qualifies for the Horizon League Championship, that begins Tuesday, Oct. 30 with the third and fourth seeds hosting first-round games.

Following the Crusaders: Both of this week’s matches will be broadcast live on WVUR, 95.1 FM, Valparaiso and online at www.valpoathletics.com, which will also have links for live stats.

Head Coach John Marovich: John Marovich holds a 43-33-16 record both overall and with Valpo in his fifth season at the helm of the Brown and Gold. Just the third head coach in program history, Marovich has the best winning percentage (.554) ever at Valpo, and ranks second in total victories.

Series Notes: Valpo is just 5-14-0 all-time against Loyola, but snapped a nine-match losing streak against the Ramblers with a 1-0 win in Chicago last year. Luisa Desario scored the match-winner in that victory in the 83rd minute. The Crusaders have never lost to Youngstown State (8-0-3), but all three draws have come in the last four matchups, including a scoreless tie last season in Youngstown.

Scouting the Opposition: Loyola enters Wednesday’s game at 7-7-2 on the year, including 2-2-1 in Horizon League play, and most recently downed Youngstown State 2-0. The Ramblers are led offensively by Moriah Schwarz (3g, 1a), while in goal, Monica Gonyo has played the vast majority of the available minutes and owns a 1.09 GAA and an .802 save percentage. Youngstown State has set a program record for wins and sits at 7-6-0 overall (2-2-0 in league play). Chelsey Haney has scored five goals and tallied two assists, while a pair of keepers have split the minutes and combined for a 1.16 GAA.

The League Race: A win on Wednesday against Loyola would clinch a spot in the Horizon League Championship for the Crusaders, as they would be assured of finishing within the top-six of the league standings. Three points against the Ramblers would also move Valpo into the second spot in the table, with a game in hand over first-place Detroit.

Senior Class: Valpo will honor its five-player senior class - Luisa Desario, Rachel Hoaglin, Janine Lytle, Catherine Terrell and Trisha Wladecki - prior to Saturday’s fixture against Youngstown State. The quintet have been a part of 33 victories and counting over their four-year careers, including a pair of third-place finishes in the Horizon League standings.

Keeping the Clean Sheet: Junior goalkeeper Kristen Manski’s 13-save performance at Wright State helped Valpo come away with a shutout in the scoreless draw, the 20th clean sheet of Manski’s career. The junior already is tied for Valpo’s career record for shutouts (20) with Erin Murray and Mele Cabral, despite having a full season left to play, and her eight clean sheets this year are two shy of the Crusader single-season record. Manski currently ranks among the top-20 nationally in both GAA (0.55, 14th) and save pct (.871, 20th), and leads the Horizon League in GAA and shutouts.

Home Sweet Home: The Crusaders close out the 2012 home campaign with a pair of games this week, looking to push their home field advantage to record heights. Following the win over Saint Joseph’s (Ind.) last Tuesday, Valpo is 6-1-1 at home this season, just one victory shy of the program record for home wins, held by numerous teams at seven.

Milestones: A pair of Crusaders recorded career firsts on Tuesday against Saint Joseph’s. Junior Hailey Chmela scored an insurance goal in the 36th minute for the first goal of her career. Meanwhile, freshman Sarah Silvasi made her first career appearance, starting in goal, and made three saves to ensure the clean sheet.

Keeping Opponents Off the Scoreboard: Valparaiso ranks among the nation’s best sides in keeping the opposition from finding the back of the net. The Crusaders have posted nine shutouts in 15 matches, good for a shutout percentage of 60%, which is tied for 12th nationally. Valpo’s team GAA of 0.52 ranks eighth in the nation, while its save percentage of .879 is good for 11th.

Playing Every Game: Valpo has maintained a fairly consistent starting lineup through the first half of the 2012 season, as seven players have been part of the Starting XI every time out for the Crusaders. In all, 11 players have seen action in each of the 15 fixtures for Valpo this season. Meanwhile, Janine Lytle has not come off the pitch for a single minute this year, playing all 1392 minutes. In fact, the senior defender has been on the bench for just 33 minutes total over her four-year career.