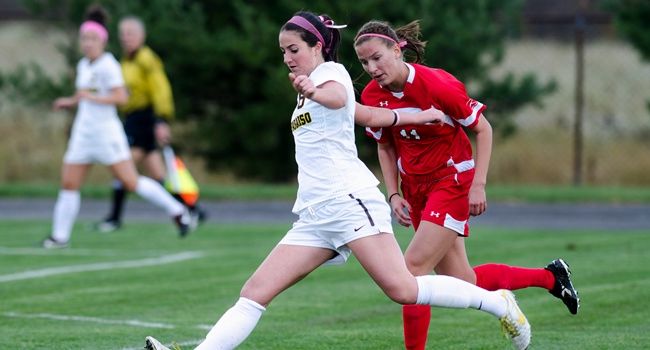 Despite dominating the run of play and unleashing a barrage of 26 shot attempts, the Valparaiso women's soccer team couldn't find the back of the net on Saturday afternoon, falling 1-0 to Youngstown State on Senior Day at Eastgate Field.

Prior to the game, the Crusaders honored their five-member senior class of Luisa Desario (Bartlett, Ill./Bartlett), Rachel Hoaglin (Lakeville, Minn./Academy of Holy Angels), Janine Lytle (Wooster, Ohio/Wooster), Catherine Terrell (Brighton, Mich./Brighton) and Trisha Wladecki (Avon Lake, Ohio/Avon Lake). The quintet has missed just nine games combined in their Crusader careers, totaling 43 goals and 35 assists over their four years and helping lead the squad to 33 victories in their time at Valpo.

Once the ball was dropped, it looked like Valpo was destined to put a crooked number on its side of the scoreboard, as the Crusaders pounded forward in the early going. Valpo tallied eight shot attempts in the first 19 minutes alone, including three apiece from Hoaglin and Desario, and forced YSU goalkeeper Jackie Podolsky to make four early saves to keep the game scoreless.

The Crusaders ultimately ended with 10 shot attempts and three corner kicks before the Penguins got off their first attempt of the game, a shot which junior goalkeeper Kristen Manski (Saint Charles, Ill./North) saved in the 31st minute. But YSU's next shot on goal would account for the game's lone tally, as following an attempted Crusader clearance, Shay Sade gained control on the left flank, about 30 yards from frame, and let loose a shot which hit the back of the net in the upper-right 90 to give the Penguins the lead in the 37th minute.

Valpo fought to get the game back on level terms heading into halftime, with one of its best efforts of the opening three quarters of an hour coming less than three minutes after the YSU goal, as junior Tara Ellis (Portage, Ind./Portage) took a shot from the top of the box along the ground which bounced off the outside of the right post. The Crusaders had one last flurry before the break, attempting three shots in the final minute to close the half with a 15-4 advantage in the category, but none of the efforts were on goal.

It was more of the same for the Crusaders in the second half, as they had a number of quality chances. A nice backheel from freshman Rita Craven (Frankfort, Ill./Lincoln-Way North) set up Hoaglin with an open lane for a shot just outside the box in the 52nd minute, but Hoaglin's shot was just over the crossbar. In the 60th minute, sophomore Abby Kenyon (Canton, Ohio/Jackson) got loose in the left side of the box, but her shot to the near post was just left of target.

A golden opportunity presented itself in the 68th minute, as a Terrell corner kick was bounced around the box before coming to the feet of junior Katie Gratzianna (Elmhurst, Ill./York) just eight yards from goal. Gratzianna's attempt went to the right of goal, however, to keep the Crusaders looking for the equalizer. Hoaglin had a pair of headers from near range in the 70th and 75th minutes, but the former was kept out of the back of the net thanks to a leaping punch over the bar by Podolsky, while the latter was corraled by the YSU goalkeeper.

Valpo ended the game with a 26-8 advantage in shots, including a 7-4 advantage on goal. Manski made three saves, while Podolsky stopped all seven of the Crusader attempts for Youngstown State (7-7-0, 2-3-0 Horizon). Hoaglin led the way for Valpo with eight shots. The Crusaders also held a significant 10-1 advantage in corner kicks as well.

Valparaiso (9-5-2, 2-2-1 Horizon) turns right around and plays Loyola on Monday afternoon at Eastgate Field in the makeup of Wednesday's postponement. Live stats for the fixture will be available at www.valpoathletics.com.