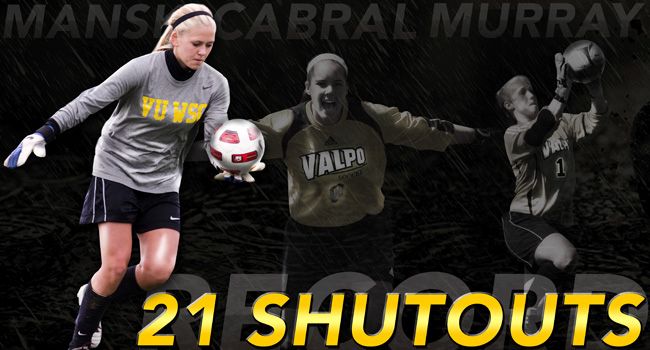 Manski has picked up nine of her shutouts this season as a junior, one shy of Valpo's single-season record in the category.  She previously earned five shutouts during her freshman year and seven as a sophomore.  Manski had to make three saves Monday to earn the record-breaking clean sheet, none more important than a stop late in the second half on a shot which deflected off a defender's foot into the air, forcing the junior to jump and secure the ball, making sure to hold the ball out over the line to keep the game scoreless.

“Loyola hasn’t given away many opportunities in any of the games they've played, so for us to get 13 shots tonight, that's a good day,” said Crusader head coach John Marovich.  “We need to be more efficient in our finishing, but we have to also remain calm and recognize that, in a league where not many goals are being conceded, we have to maintain a sense of normalcy and know that the most important thing is creating chances.  We are doing that, and we had a few more good chances tonight – when we finish those, we'll win games.  We just need to maintain our mindset, trust each other and believe that positive things are going to happen.”

After a first half which saw each side tally just four shot attempts and put just one on goal, the best chance for either side to crack the scoreboard came early on in the second half for the Crusaders.  Freshman Rita Craven (Frankfort, Ill./Lincoln-Way North) cracked a right-footed shot from outside the box on the left side in the 55th minute that ricocheted off the crossbar in the upper-right corner.

The ricochet bounced directly to senior Luisa Desario (Bartlett, Ill./Bartlett), who took an effort on the volley from 12 yards out on the right side of the box, a shot which Loyola goalkeeper Monica Gonyo was forced to parry over the bar with a leaping save.  Off the ensuing corner kick, senior Rachel Hoaglin (Lakeville, Minn./Academy of Holy Angels) had a shot on goal, but Gonyo stopped that one as well.

The sides combined for just seven shot attempts in the overtime periods, none of which were on frame.  Both teams did have chances on the break to play forwards into the box, but the connections were not there as the game ended in a 0-0 tie.

Gonyo made four saves to match the shutout for Loyola (7-7-3, 2-2-2 Horizon).  Valpo and Loyola each finished wtih 13 shot attempts, the Crusaders putting four on goal and the Ramblers three.  Both sides had three corner kicks apiece as well.

“I thought Catherine Terrell did an outstanding job in her time today as far as moving the ball and being available to her teammates,” said Marovich.  “I thought she made a big difference in the second half - we played much better in the second half, and a lot of that had to do with the work she did.”

Valparaiso (9-5-3, 2-2-2 Horizon) will look to qualify for the 2012 Horizon League Championship in its regular season finale at Green Bay on Saturday afternoon.  Live stats will be available through www.valpoathletics.com.