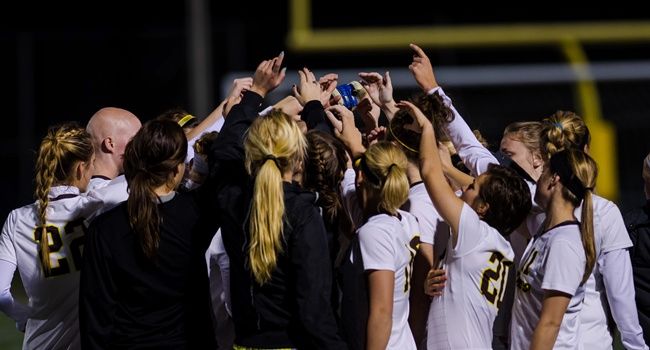 This Week in Crusader Soccer: The third-seeded Valparaiso women’s soccer team opens up the 2012 Horizon League Championship with a home game on Tuesday afternoon, hosting sixth-seeded Loyola at Eastgate Field at 3 p.m.

Previously: The Crusaders clinched a home game in the league tournament with a 1-0 win at Green Bay on Saturday afternoon. Knowing they would need to win to host a game, Katie Gratzianna headed home a corner from Tara Ellis in the 68th minute for the deciding goal. Kristen Manski made three saves for the shutout.

The Road Ahead: With a win on Tuesday, the Crusaders would advance to Milwaukee to take on second-seeded Detroit in the first of two semifinals on Friday afternoon. The league tournament title game is slated for Sunday afternoon.

Following the Crusaders: Fans can follow Tuesday afternoon’s game against the Ramblers via live stats, available at www.valpoathletics.com.

Head Coach John Marovich: John Marovich holds a 44-34-17 record both overall and with Valpo in his fifth season at the helm of the Brown and Gold. Just the third head coach in program history, Marovich has the best winning percentage (.553) ever at Valpo, and ranks second in total victories.

Series Notes: Valpo is just 5-14-1 all-time against Loyola, but has earned results in each of the last two meetings. The Crusaders snapped a nine-match losing streak against the Ramblers with a 1-0 win in Chicago last year, when Luisa Desario scored the match-winner in the 83rd minute. Then, this season’s game, which was postponed five days, turned out to be a scoreless draw at Brown Field.

Scouting the Opposition: Loyola enters Tuesday’s game at 7-8-3 on the year, including 2-3-2 in Horizon League play. The Ramblers closed out the regular season last Wednesday with a 1-0 home loss to Green Bay, and had to wait out Saturday’s results before learning they would be in the tournament. Loyola is led offensively by Moriah Schwarz (3g, 1a), while in goal, Monica Gonyo has played the vast majority of the available minutes and owns a 1.01 GAA and an .809 save percentage.

Valpo in the HL Championship: The Crusaders are 2-2-2 since joining the Horizon League in the HL Championship, but have fallen in penalty kicks in each of their two losses. At home, Valpo owns a 1-0-2 record, defeating Green Bay (2-0) in 2009 and drawing with Youngstown State in 2008 and Butler in 2011 before failing to advance on penalties. It will be the first postseason meeting between Valpo and Loyola.

An Accurate Preseason Poll: The Horizon League head coaches nailed the top of the table in the 2012 preseason poll. Valparaiso was picked to finish in third place, where it ended up with 11 points. Only Detroit and Milwaukee, which shared the top spot in the poll, were projected ahead of the Crusaders, and the two sides ultimately tied atop the table with 15 points.

All-League Honorees: Valpo had five players honored as the league released the postseason awards Monday. Seniors Luisa Desario and Rachel Hoaglin were both named to the All-League First Team, the first time since joining the Horizon League that the Crusaders have had multiple players selected to the first team. Also honored were freshmen Rita Craven, Jenny Fassbinder and Sarrah Ludwig, who all earned spots on the league’s All-Newcomer Team.

Setting Another Record: Junior goalkeeper Kristen Manski, who broke Valparaiso’s career shutouts record with the clean sheet against Loyola last Monday, matched another Crusader record on Saturday afternoon. Manski made three saves in the 1-0 win over Green Bay for her tenth clean sheet of the season, matching Mele Cabral’s 2008 season for most shutouts in a single year. Manski, who earned five shutouts as a freshman and seven as a sophomore, pushed her own career shutouts record to 22 with the blanking of the Phoenix.

Double-Digit Wins: Valpo’s win on Saturday marked the Crusaders’ tenth win of the 2012 campaign - the eighth time in the last 12 years that Valpo has reached the milestone of double digits in the wins column. The 2001 squad was the first Crusader team to win at least ten matches, and then six straight Valpo teams from 2004 through 2009 reached double digits in victories.

Playing Every Game: Valpo has maintained a fairly consistent starting lineup throughout the 2012 season, as six players have been part of the Starting XI every time out for the Crusaders. In all, 11 players have seen action in each of the 17 fixtures for Valpo this season. Meanwhile, Janine Lytle has not come off the pitch for a single minute this year, playing all 1682 minutes. In fact, the senior defender has been on the bench for just 33 minutes total over her four-year career.