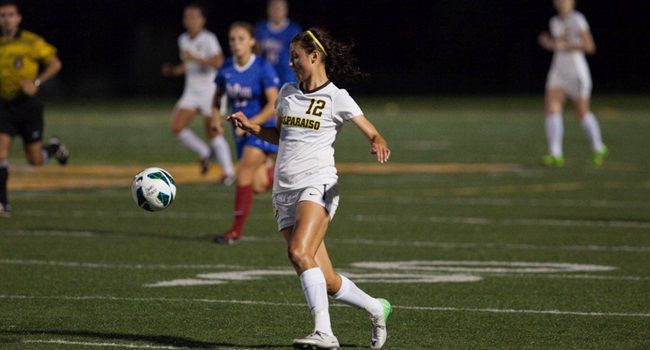 The Valparaiso women's soccer team opened the 2013 campaign on the right foot Friday evening at Brown Field, as a goal in the 32nd minute from sophomore Rita Craven (Frankfort, Ill./Lincoln-Way West) was the deciding tally in a 1-0 victory over Big East foe DePaul.

"Being at home with a Big East opponent, I thought the energy was great for the match," said Crusader head coach John Marovich. "Our fans were great tonight - we had some singing in the crowd, and it was just such a great environment. The reason our players were able to battle and fight through the game tonight was because of the energy present in the stadium."

Both sides had limited opportunities in the opening 45 minutes, with both Valpo and DePaul taking just three shots apiece. All three of the Blue Demons' shots were on goal, but from distance, allowing Crusader goalkeeper Kristen Manski (St. Charles, Ill./North) to make a trio of saves.

"I liked our attitude and commitment to trying the play in the first half," said Marovich. "We had some very good ideas and really good vision. We just did a good job in being aggressive in trying to get forward."

Meanwhile, Valpo had just one shot on goal in the first half, but made it count for the eventual game-winning tally. A nice run of possession led to freshman April Cronin (Glenview, Ill./Glenbrook South) carrying down the right flank towards the end line. Cronin passed the ball along the ground to Craven on the right side of the box, and Craven took a touch before sending a well-placed shot inside the far post from 10 yards out to give the Crusaders the edge.

"The goal goes back to vision," said Marovich. "We had some great combination play up the flank, and April slipped in a really nice ball. Rita did a very good job staying composed and letting the play develop. She found a seam at the back post, and finished clinically. It really was a team goal with the bit of possession we had before we got to goal - it was more than just one or two passes."

DePaul would out-shoot Valpo 6-2 in the second half, but again the Crusaders limited the Blue Demons to low-percentage chances. Three of the shots came in the final 10 minutes as DePaul pressed looking for the equalizer, but Manski made one of her two second-half saves late and saw the other two attempts wide as the Crusaders held the clean sheet in the opener.

"The game changed a little bit in the second half," said Marovich. "DePaul was urgent to get to goal quickly, and we didn't have as much of the ball as we would have liked. But I thought we did a really good job winning the ball in the air in the last 45 minutes."

DePaul (0-1-0) ended up with a 9-5 advantage in shots and took the only two corner kicks of the match as well. Manski made five saves for the 23rd shutout of her career, while Alejandria Godinez stopped two shots in the losing effort for the Blue Demons.

"Kristen did a nice job in goal tonight," said Marovich. "She made some saves in the end on some silly fouls we gave away - that's something we need to clean up going forward. I thought everybody who got on tonight did a really nice job, but now we have to get ready a tough game Sunday."

Valparaiso (1-0-0) turns around to play Miami (Ohio) on Sunday at 1 p.m. The RedHawks are receiving votes in the national polling and advanced to the second round of the NCAA Tournament in 2012. Live stats for the game will be available through ValpoAthletics.com.