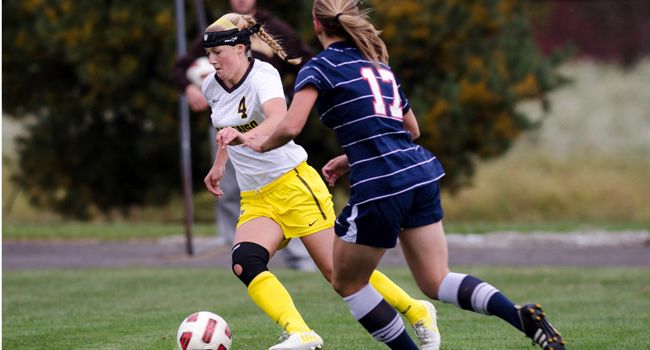 In a game which spanned two days, sophomore Jordyn Ryfiak (Rockford, Mich./Rockford) made sure it was the Valparaiso women's soccer team and its fans which would go to bed happy, as Ryfiak found the back of the net in the 94th minute for the golden goal in a 1-0 victory over Grand Canyon at Brown Field.

The clock struck midnight late in the second half, but the two teams kept playing on, as the game would eventually head into overtime scoreless. The Crusaders held the better of play early in extra time, and made it pay just inside of four minutes into the extra session. Senior Hailey Chmela (Hawthorn Woods, Ill./Lake Zurich) gained possession in the box and had an attempt at goal blocked by a GCU defender, where it deflected to Ryfiak. From the edge of the six-yard box, Ryfiak sent a shot which hit off the inside of the right-hand post and into the net for the game-winner.

"I thought Hailey had a very good performance today - her ability to get in behind in the first half set a tone for us," said Crusader head coach John Marovich. "I'm excited that in the end, she was able to create an opportunity for Jordan - I think it was well deserved. The same goes for Jordan as well. She did some very good work in the second half and did a tremendous job of helping us keep possession. It was fitting she was able to finish it off with a goal after a great effort."

The start of the game was delayed nearly three hours due to inclement weather from storms moving through the area, with the teams being called off the field as just over 30 minutes remained in pregame warmups. Once the lightning subsided, the teams re-took the pitch for the final half-hour of warmups at approximately 9:45 p.m., with kickoff finally coming at 10:20 p.m.

The first half saw Valpo control play, as the Crusaders kept the Antelopes from even attempting a shot or winning a corner kick. Meanwhile, of Valpo's five shots in the first three-quarters of an hour, the Crusaders had one stellar opportunity. Chmela took a strike from just inside the top of the box in the 26th minute that eluded Grand Canyon goalkeeper Cat Lena, but caromed off the upper-right corner of the goal frame and back into play.

In the second half, the Crusaders maintained the better of possession, but the shots evened out, as Grand Canyon (0-2-0) had five attempts to Valpo's four. Neither side had a real quality scoring chance in the period, however, as the game advanced into overtime.

Senior Kristen Manski (St. Charles, Ill./East) ended up having to make just one save to earn her second shutout of the season, while Lena stopped four shots for the Antelopes. Valpo ended the contest with an 11-5 edge in total shots.

"I was pleased with the way our midfield was able to help us keep the ball in the second half," said Marovich. "We had the ball a bit more, although we maybe gave away a few more chances, it felt like we had better control of the game and gave ourselves more chances to be successful. In the end, we're happy to get the result - Grand Canyon has a nice team that was good for us to play against with the different problems they posed us."

Valparaiso (2-1-0) hits the road for the first time this season on Sunday to take on Kent State. Live stats for the match will be available through ValpoAthletics.com.