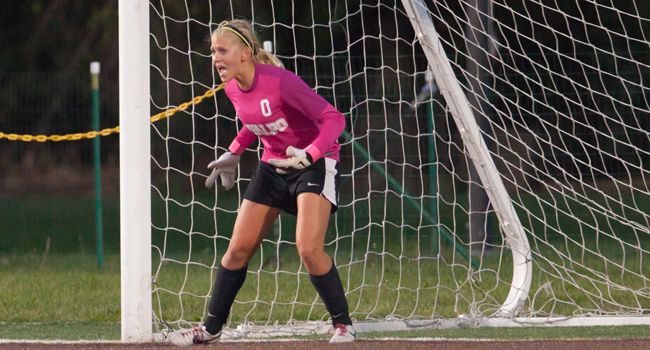 Valparaiso senior goalkeeper Kristen Manski (St. Charles, Ill./North) was named the Horizon League Defensive Player of the Week on Monday after continuing her stellar start to the 2013 season last weekend.

Manski opened the weekend by making four saves in the Crusaders' 1-0 win over Northwestern, Valpo's first-ever victory over a Big Ten side. Then, on Sunday, the senior made four more stops to secure Valpo's 1-0 victory against IPFW, including a huge save early on in the contest on an indirect free kick just eight yards from goal.

With the pair of clean sheets, Manski now has four shutouts through Valpo's first six matches this year. She has surrendered just two goals so far this season and tops the league statistical tables in both goals against average
(0.32) and save percentage (.929).

The strong start to her final campaign has helped buoy Manski's career numbers as well. Already Valpo's all-time leader in shutouts, GAA and save percentage entering the season, Manski now owns 26 career clean sheets, third-most in Horizon League history and just behind second position. Her career GAA is down to 0.82 as well, which would be fourth-best in league history.

Manski and the rest of the Crusaders return to the pitch this weekend for a pair of road matches, playing at IUPUI Friday evening before traveling to Evansville for a Sunday afternoon matchup.