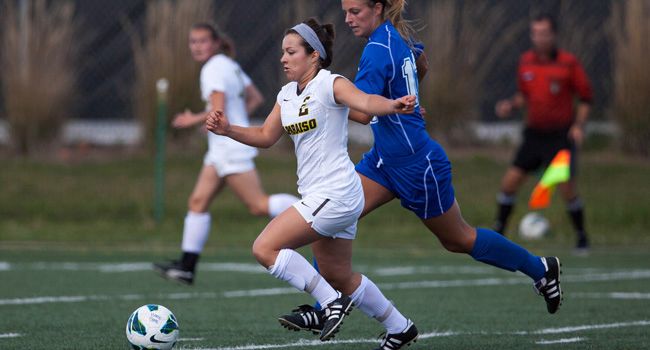 This Week in Crusader Soccer: The Valparaiso women’s soccer team returns home to the friendly confines of Brown Field this Saturday night, as the Crusaders host Cleveland State in a key Horizon League battle.

Previously: The Crusaders struck first last Saturday in their Horizon League opener at Milwaukee, but three straight goals from the Panthers were too much to overcome, as the Crusaders fell by a 3-2 final. Hailey Chmela gave Valpo the lead in the 27th minute, but the Panthers picked up goals in the 28th, 44th and 68th minutes to earn the win. Allegra Godfrey grabbed a consolation goal in the 80th minute for Valpo.

Head Coach John Marovich: John Marovich holds a 50-39-18 record both overall and with Valpo entering his sixth season at the helm of the Brown and Gold. Just the third head coach in program history, Marovich has the best winning percentage (.551) ever at Valpo, and ranks second in total victories.

Series Notes: The Crusaders hold an 8-1-0 advantage in the all-time series over the Vikings, with the sides meeting once a season for each of the last nine years. Valpo claimed a 2-1 win over CSU last season in Cleveland, thanks to goals from Luisa Desario and Rachel Hoaglin. Kristen Manski made three saves in the winning effort.

Scouting the Opposition: After starting the season 2-4-0 in its first six games, Cleveland State is unbeaten in its last six and enters Brown Field at 7-4-1 overall this year. Most recently, the Vikings picked up a win in their Horizon League opener, hosting Detroit and coming out with a 2-0 victory. Vickie Havas (6g, 3a) and Amanda Sivic (4g, 4a) lead a Viking offense which has tallied 20 goals on the season. In goal, Sarah Wood has seen the vast majority of action and owns a 1.30 GAA.

Finding the Back of the Net: Despite the loss last Saturday, the Crusaders scored two goals, the third consecutive match Valpo has found the back of the net multiple times. In fact, the six goals over the Crusaders’ last three games is one more than their cumulative total from the season’s first eight contests. The last time a Valpo team scored multiple goals in three or more consecutive games came late in the 2010 season, when the Crusaders tallied at least two goals in eight straight fixtures.

Spreading the Wealth: While the Crusaders have scored just 11 goals so far this season, numerous players have gotten in on the scoring. Seven different players have scored the 11 goals, with Hailey Chmela and Allegra Godfrey each picking up their second goal of the season last time out against Milwaukee. The Crusaders have also had nine total assists on the 11 markers, which have come from nine different players. Chmela and Jenny Fassbinder lead Valpo with just five total points each (2g, 1a), while in all, 12 of the 23 Crusaders who have played this year have at least one point.

No Interruption to League Play: The game against Milwaukee last Saturday marked the first of seven straight Horizon League contests to end the 2013 regular season for the Crusaders. This marks the third time since joining the HL that Valpo has played its league slate uninterrupted by any non-league contests, as the 2007 and 2010 teams also had the same schedule arrangement.

Dominance at Home: In its first season using Brown Field as its primary home field, Valpo has been nearly perfect at home so far this year. The Crusaders are 6-1-0 at home, losing only on a late penalty kick to Miami (Ohio), and have given up just one goal in the run of play. Valpo is now 15-5-3 all-time at Brown Field. On the flip side, the Crusaders still have been unable to find a win on the road (0-3-1).

Big Victories: Already this season, the Crusaders have won a pair of games over BCS opponents. Valpo lifted the lid on the 2013 campaign with a win over DePaul, the Crusaders’ first-ever win over a team from any power conference (Big East). Then, Northwestern came to Brown Field on Sept. 5 and left 1-0 losers, as Valpo won its first-ever game over a Big Tan squad.

One-Nil: While Valpo has played five straight games that haven’t finished 1-0, they started the season with six consecutive 1-0 contests, a stretch in which it went 4-2-0. The trend of 1-0 results dates back to last season, as of Valpo’s 19 matches in 2012, over half of them resulted in 1-0 final scores, with the Crusaders going 6-5-0 in those games.

End of a Defensive Streak: Valpo surrendered two goals in its loss to Evansville, ending a remarkable stretch of defensive play by the Crusaders. You had to go back over a calendar year (378 days to be exact) to find the last time Valpo had given up more than one goal in a match: a 3-1 loss at Iowa on Sept. 2, 2012. The Crusaders went 21 straight matches giving up either one or zero goals each time out, posting a team GAA of 0.32 during that stretch.