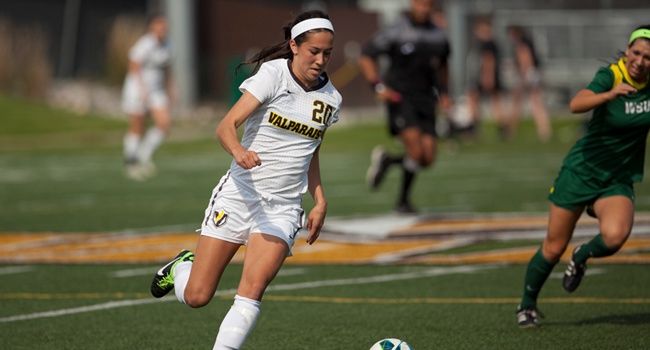 A matchup of two of the top defenses in the Horizon League played out according to form Saturday afternoon at Brown Field, as Valparaiso and Wright State played 110 minutes of scoreless soccer in a double-overtime, 0-0 draw.

“I think we had a game plan going in – we knew how Wright State was going to play – and we followed the plan well,” said Crusader assistant coach Vanessa Vella.  “I think we had good possession and earned a lot of corners, but just didn’t connect in the final third.  We never really had any big letdowns, and played consistently well throughout, but it was just the final touch, the final shot that let us down a bit today.  It was good to earn a shutout against a team that came in 2-0 in league play.”

The first half saw the Crusaders out-shoot the Raiders 5-2, including three shots on goal, all of which were handled by WSU goalkeeper Brooke McCurdy.  Valpo also earned five first-half corner kicks, but was unable to capitalize on any of them.  On the other end, the Raiders had just two shots, but threatened in the final minute, as Kristen Manski (St. Charles, Ill./North) was well off her line to save a shot from Emilie Fillion.

In the second three-quarters of an hour, Valpo held a slight 8-6 advantage in shots.  Both sides had solid chances in a 30-second stretch with about 15 minutes to play, starting with a Wright State breakaway.  Fillion carried the ball down the right-hand flank and was one-on-one with Manski, but her shot from about 15 yards out was along the ground right at the Crusader goalkeeper.

On the ensuing runout following Manski’s save, the Crusaders pushed forward quickly and got the ball into the attacking third.  Junior Kristen Warner (Lombard, Ill./Glenbard South) delivered a line-drive pass from the top left corner of the 18 towards the far post, meeting the run of freshman Robin Wenzel (Woodstock, Ill./Marian Central Catholic), but Wenzel was unable to control and put a shot on frame, as the game remained scoreless.

Overtime saw Wright State put the only shot on goal late in the first extra period, as Ini Umotong sent an effort from distance in the 99th minute that was easily stopped by Manski.  The Crusaders had a couple nice passes in the second extra period find runs by freshman Morgan Manzke (Orland Park, Ill./Sandburg), but both of her shots went over the crossbar.

The Crusaders ended the game with a 17-9 edge in shots and also attempted 11 corner kicks to the Raiders’ four.  Manski stopped four shots to earn the clean sheet, while McCurdy made three saves for Wright State (5-4-4, 2-0-1 Horizon).

Valparaiso (7-5-2, 1-2-1 Horizon) continues league play next Saturday at Youngstown State.  The game is slated for an 11 a.m. CT kickoff, with live stats available through ValpoAthletics.com.