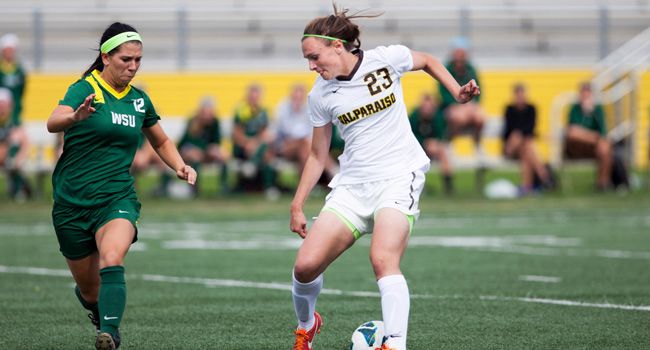 This Week in Crusader Soccer: The Valparaiso women's soccer team looks to earn three points on the road Saturday with regular season action starting to wind down, as the Crusaders travel to take on Youngstown State. Following this weekend, Valpo has just two regular season matches remaining.

Previously: Valpo went 0-1-1 in a pair of Horizon League contests last week. The Crusaders opened play with a mid-week action at Oakland, falling 2-0 to the Horizon League newcomers. Then, Valpo hosted Wright State on Saturday at Brown Field, where both teams battled for 110 minutes to a scoreless draw.

Following the Crusaders: Live stats for the match at Youngstown State will be available through ValpoAthletics.com.

Head Coach John Marovich: John Marovich holds a 51-40-19 record both overall and with Valpo entering his sixth season at the helm of the Brown and Gold. Just the third head coach in program history, Marovich has the best winning percentage (.550) ever at Valpo, and ranks second in total victories.

Series Notes: Valpo owns an 8-1-3 advantage in the all-time series over the Penguins, but YSU's one victory came at Eastgate Field last season on Oct. 20, a 1-0 decision. All three of the draws in the all-time series have come in the last five meetings as well. The last time the two sides faced off in Youngstown resulted in a scoreless tie on Oct. 28, 2011.

Scouting the Opposition: The Penguins enter Saturday night's match at 4-9-1 overall this year, but evened their record to 2-2-0 in Horizon League play with a Wednesday victory at Cleveland State by a 1-0 final. YSU has scored just 10 goals in its 14 matches, with Cara Armstrong pacing the Penguins with three goals. Jackie Podolsky has seen the majority of minutes in goal and owns a 1.22 GAA.

Manski Continues to Stand Strong: Crusader senior goalkeeper Kristen Manski continues to close out her career strong in goal for Valpo. Following the shutout of Wright State last Saturday, Manski now has seven clean sheets on the season and owns a 0.75 GAA on the year, both of which pace all Horizon League goalkeepers as she attempts to lead the league in both categories for the second straight year. On the Horizon League all-time charts, Manski’s 29 career clean sheets rank second, where she will close her career, while her 0.85 career GAA is fifth-best in league history.

Finding the Back of the Net: While Valpo was shut out in both of its matches last week, the Crusaders had previously scored multiple goals in four consecutive games. The stretch of eight goals over a four-game span came after the Crusaders scored just five times in their first eight games of the season. The last time a Valpo team scored multiple goals in four or more consecutive games came late in the 2010 season, when the Crusaders tallied at least two goals in eight straight fixtures.

Spreading the Wealth: While the Crusaders have scored just 13 goals so far this season, numerous players have gotten in on the scoring. Eight different players have scored the 13 goals, with Jenny Fassbinder picking up her team-high third goal of the year to open the scoring against CSU and Morgan Manzke tallying her first career goal. The Crusaders have also had 12 total assists on the 13 markers, which have come from 10 different players. In all, 14 of the 23 Crusaders who have played this year have at least one point.

Dominance at Home: In its first season using Brown Field as its primary home field, Valpo has been nearly perfect at home so far this year. The Crusaders are 7-1-1 at home, losing only on a late penalty kick to Miami (Ohio), and have given up just two goals in the run of play. Valpo is now 16-5-4 all-time at Brown Field. On the flip side, the Crusaders are still in search of their first road win of the year as they travel to Youngstown State on Saturday, as they are 0-4-1 on the road this season.

Big Victories: Already this season, the Crusaders have won a pair of games over BCS opponents. Valpo lifted the lid on the 2013 campaign with a win over DePaul, the Crusaders’ first-ever win over a team from any power conference (Big East). Then, Northwestern came to Brown Field on Sept. 5 and left 1-0 losers, as Valpo won its first-ever game over a Big Ten squad.

End of a Defensive Streak: Valpo surrendered two goals in its loss to Evansville, ending a remarkable stretch of defensive play by the Crusaders. You had to go back over a calendar year (378 days to be exact) to find the last time Valpo had given up more than one goal in a match: a 3-1 loss at Iowa on Sept. 2, 2012. The Crusaders went 21 straight matches giving up either one or zero goals each time out, posting a team GAA of 0.32 during that stretch.