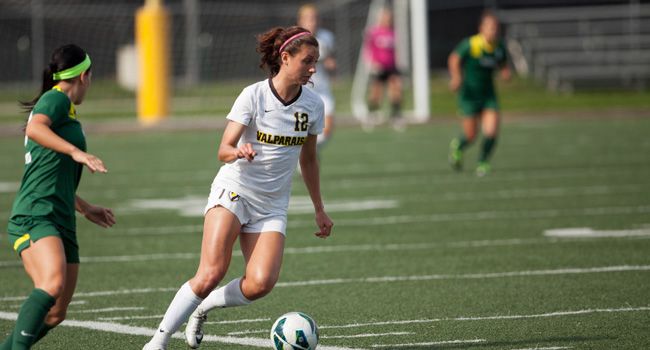 A pair of goals early in the second half were more than enough for the Valparaiso women's soccer team on Saturday afternoon at Youngstown State as the Crusaders earned their first road win of the season and picked up three key Horizon League points with a 2-0 victory.

"We came out today and we had a nice composure about our performance," said Crusader head coach John Marovich. "I felt like as we got into the match, we were able to make a few adjustments in our attacking which really paid off - we were able to create ourselves lots of chances down the flank, which resulted in numerous corners."

The teams played to a scoreless draw through 45 minutes despite constant pressure from Valpo, as the Crusaders out-shot the Penguins 8-5 in the first half and also earned nine corner kicks. Both Valpo goalkeeper Kristen Manski (St. Charles, Ill./North) and YSU goalkeeper Jackie Podolsky made two first-half saves to keep the game scoreless.

Valpo broke the seal on the scoreboard less than three minutes into the second half, however. Sophomore Rita Craven (Frankfort, Ill./Lincoln-Way North) made a run down the left side, beating a pair of YSU players before collecting the ball from 12 yards out and sending it inside the far post to put the Crusaders on top, 1-0.

The Crusaders added an insurance goal in the 57th minute as well. Following a save by Manski, the senior unleashed a punt well down the field that Craven ran onto. Craven then sent a cross into the box to freshman Robin Wenzel (Woodstock, Ill./Marian Central Catholic), who was there to apply the finish into the upper-right 90 to make it 2-0 Valpo.

Manski had to make just one save following her assist on Wenzel's goal to maintain the clean sheet, ending the night with four total saves in her 30th career shutout. Podolsky stopped six shots for Youngstown State (4-10-1, 2-3-0 Horizon). Valpo ended the day with a 17-13 advantage in shots and an enormous 13-1 edge in corner kicks over the Penguins.

"In the first half, we got a number of crosses in and other chances, but maybe were just not quite on time with our finishing," said Marovich. "But in the second half, we remained composed and consistent, kept persisting and didn't panic just because the score was still 0-0. We had those opportunities in the second half, and got good execution from the players involved in the goals to finish. Overall, I'm just really pleased with our team's overall performance - to go on the road and earn three points is never easy and has happened only a couple of times in the Horizon League this season."

Valparaiso (8-5-2, 2-2-1 Horizon) will look to make it back-to-back road wins next Saturday afternoon at Detroit. Kickoff is set for 3 p.m. CT, with live stats and live video links available at ValpoAthletics.com.