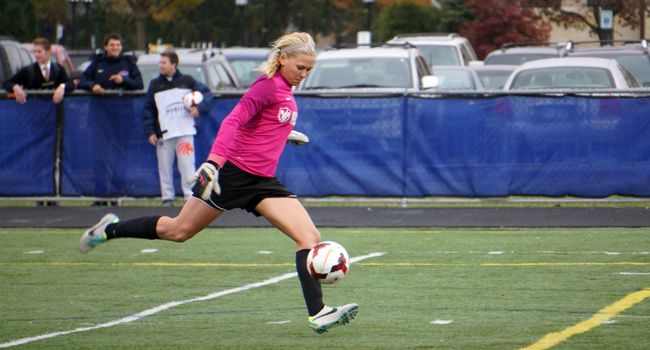 The Valparaiso women's soccer team saw its season come to a heartbreaking end on Tuesday afternoon in Detroit, Mich., as Detroit scored less than four minutes from the end of double overtime to send the Crusaders to a 1-0 defeat in opening-round play of the 2013 Horizon League Championship.

Regulation play proved to be mainly a battle in the middle third of the field between the fifth-seeded Crusaders and the fourth-seeded Titans, as while Detroit out-shot Valpo 10-8 in the opening 90 minutes, only five combined shots were on goal. Senior Kristen Manski (St. Charles, Ill./North) made three saves in regulation for the Crusaders, while Martha Dunbar made a pair of stops for Detroit to keep the game scoreless.

While there weren't many shots on goal, both sides had opportunities in regulation ring off the goal frame. The Titans had a shot hit the post in the final minute of the first period, and then also put a shot from the right flank off the crossbar in the 86th minute. Then, with less than 90 seconds to go in the second half, the Crusaders had a corner kick placed perfectly in the center of the box, but the ensuing header hit the post to ensure the game would enter extra time scoreless.

Both sides had one shot attempt blocked by a defender in the opening 10 minutes of extra time, and Manski then made a simple save on a header from the top of the box in the 103rd minute. But the Titans scored the golden goal in the 107th minute, as Sara Zawacki's cross got knocked to Heather Brown, on the left side of the box, just outside the six. Brown's strike beat Manski to the near post to send Detroit (11-7-1) into the tournament semifinals.

Tuesday's loss ended the Crusaders' season, as well as the careers of seniors Manski, Hailey Chmela, Tara Ellis, Lauren Gagnon, Katie Gratzianna and Amanda Ulin. The group of six seniors helped Valpo to 31 victories over their four-year Crusader careers, combining to make 333 appearances in the Brown and Gold, including 217 starts. In their last three seasons, Valpo posted three of the top-five defensive seasons in program history, including the nation's best GAA in 2012.