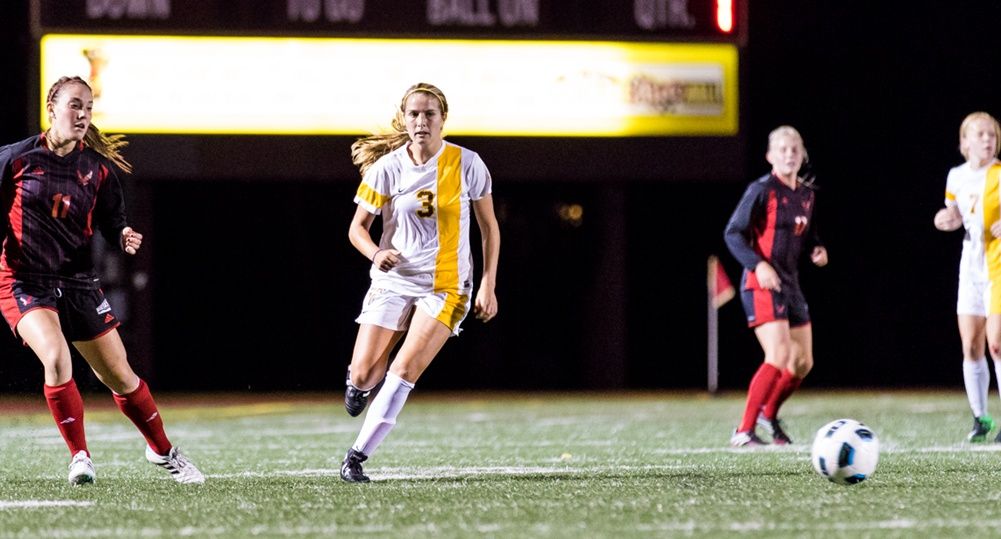 Less than two minutes from the end of overtime Friday night at Brown Field, the Valparaiso University women’s soccer team suffered a heartbreaking defeat, as Eastern Washington scored in the 109th minute to send the Crusaders to a 2-1 defeat.

"It was a nice Eastern Washington team which we played tonight," said Crusader head coach John Marovich. "I thought they tried to move the ball and play the game well, so it was a great test for us. I liked a lot of the things that we did tonight. When they put us under pressure, we were able to continue to move the ball - that was something we had talked about being key, and we were able to do that. We created chances for ourselves tonight, but just weren't able to finish in critical moments, which was unfortunate."

After a scoreless opening 45 minutes, it would be the Eagles who would strike first. Chloe Williams fed the ball into the middle of the box in the 60th minute for Allison Raniere, whose shot to the left found its way into the back of the net to give EWU the 1-0 lead.

But Valpo responded in short order, tying the match less than four minutes later. Senior Sarrah Ludwig (Downers Grove, Ill./South) delivered a pass to junior Robin Wenzel (Woodstock, Ill./Marian Central Catholic), who set up freshman Cory Griffith (Lemont, Ill./Providence Catholic). Griffith’s shot beat Eastern Washington goalkeeper Mallory Taylor inside the right-hand post, as the freshman got off the mark for her career in the 63rd minute to level the contest at 1-1.

"I did like how we responded to adversity tonight," said Marovich. "When Eastern Washington scored, we were able to get that goal back in relatively quick fashion. Sydney also had some really nice saves over the course of the match."

But Eastern Washington would come out on top in the end on Friday night. With time winding down in the second period of extra time, it was an effort from 25 yards from Williams which proved to be the decisive tally.

Valpo out-shot Eastern Washington (4-1-1) on the day by a 13-6 margin. Taylor stopped nine shots for the Eagles in the winning effort, while junior Sydney Galvez-Daley (Chicago, Ill./Fenwick [Creighton]) made three saves in goal for the Crusaders.

"These games, and the moments within the games, are the things we want to go through to get ready for the Horizon League," said Marovich. "We're looking forward to going out and testing ourselves again on Sunday."

Valparaiso (2-3-1) looks to return to the win column Sunday afternoon as the Crusaders host Bowling Green at 1 p.m. on Brown Field. The game will be broadcast live on ESPN3.com, with live stats available via ValpoAthletics.com.