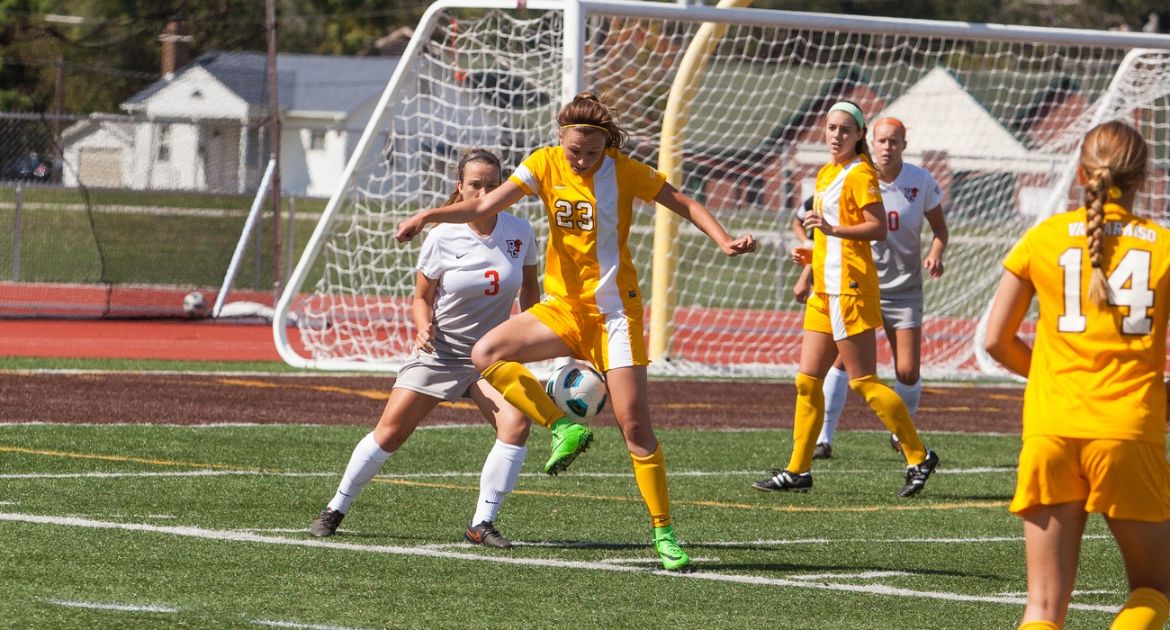 This Week in Crusader Soccer: The Valparaiso University women’s soccer team begins defense of its Horizon League championship from last season on Friday evening, as the Crusaders host Wright State at Brown Field to open up league play. Valpo then closes out the four-match homestand Sunday afternoon versus Indiana State.

Previously: Valpo opened the 2015 home campaign with a pair of home matches last weekend, but could not find a victory, going 0-1-1 over the two contests. The Crusaders fell in double overtime on a goal with 90 seconds remaining to Eastern Washington, 2-1, on Friday before drawing with Bowling Green on Sunday, 1-1.

Head Coach John Marovich: The 2014 Horizon League Coach of the Year, John Marovich holds a 68-48-26 record both overall and with Valpo entering his eighth season at the helm of the Brown and Gold. Just the third head coach in program history, Marovich has the best winning percentage (.570) ever at Valpo, and ranks second in total victories, just 10 wins shy of the top spot.

Series Notes: Wright State – Valpo is just 2-8-3 all-time against Wright State, but the Crusaders have earned all five of their positive results versus the Raiders in the last six matchups, including the last four in a row (1-0-3). Last season, Valpo snapped a streak of three straight draws with WSU thanks to a 2-1 come-from-behind win in Dayton, which saw April Cronin and Vanesa Abad score to overcome a 1-0 deficit.

Indiana State – The Crusaders own a 7-2-2 advantage in the all-time series with the Sycamores and have not lost to ISU since 2003. The last meeting between the two sides came back in September of 2010 – a 1-1 draw in Terre Haute. Casey Pedersen converted a penalty kick for the Crusaders’ lone goal.

Scouting the Opposition: Wright State – The Raiders will enter Brown Field Friday evening with a 3-4-0 overall record this year, and have dropped their last two matches at Butler and at Toledo, both by 1-0 finals. Natalie Sedlock has scored three of WSU’s eight goals on the season. In goal, Halle Pyle and Kelsey Deal have split time and combined for a 1.00 cumulative GAA.

Indiana State – The Sycamores own a 3-5-0 record on the season entering the weekend and will play at Chicago State on Friday afternoon before traveling to Brown Field. Sydney Lovelace (4g, 2a) and Maddie Orf (3g, 2a) lead an ISU offense which has scored 11 goals in eight matches, while Brittany San Roman has seen every minute at goalkeeper and owns a 1.96 GAA.

Crusaders Picked Atop Preseason Poll: The Crusaders were a unanimous choice to repeat atop the league table in 2015, according to preseason polling of the league’s head coaches. Valpo received all nine possible first-place votes, as head coaches were not allowed to rank their own team, to finish with 81 points. Oakland received the remaining first-place vote and was ranked second with 63 points, narrowly edging out Detroit with 60 points.

Looking Back at 2014: Last season’s Crusader squad was a record-setting side across the board, posting a 14-2-4 record, their 10th winning campaign in the last 11 years. The 14 wins marked a new program record, and the team set new marks for winning streak (12 matches) and unbeaten streak (18 matches) as well. The 2014 Valpo side became just the third squad in Horizon League history to post a perfect 8-0-0 record in regular season league play, as the Crusaders swept through the regular season and the tournament as well. Defensively, the squad set a new program best, surrendering just nine goals, while Sydney Galvez-Daley set new individual records for shutouts (12), wins (14) and GAA (0.43).

Working Extra Time: For the first time in program history, the Crusader women’s soccer team has seen four consecutive matches go past 90 minutes. Starting with the game at Belmont on Sept. 4, each of the last four contests has gone into at least the second overtime period, with two lasting the full 110 minutes. Valpo, which is 1-1-2 in those four matches, had previously gone extra time in three straight fixtures on two occasions.

Plenty of Chances: While Valpo scored just two goals over last weekend’s two games, it wasn’t for lack of trying, as the Crusaders generated plenty of scoring opportunities. Friday against EWU, the Crusaders tallied 13 shot attempts, 10 on goal. Then, taking on Bowling Green on Sunday, Valpo bombarded the Falcons’ defense over and over again, finishing the contest with 32 shots, 22 of which were on frame. The 32 shots marked the fifth-most in a single match in program history, while the 22 shots on goal were third-most in program history.

Griffith Gets Off the Mark: Freshman Cory Griffith became the third different Crusader to find the back of the net this season, tallying the tying goal on Friday evening against Eastern Washington. Griffith’s goal in the 63rd minute came in just her second appearance in a Valpo uniform.

Cronin Tallies Another Goal: Junior April Cronin continued her goal-scoring ways on Sunday, finding the back of the net for the game-tying tally in the 53rd minute against Bowling Green. Cronin now leads the Crusaders and is ranked second in the league with four goals on the season. With 14 career goals, the junior is already tied for eighth in Valpo history and is just one goal shy of a tie for sixth position.

Back On the Home Turf: The friendly confines of Brown Field are a welcome sight for the Crusaders, as they started the season with a five-match road stretch – the longest string of matches away from home to start a season in program history. Despite going winless last weekend, since moving to Brown Field full-time prior to the 2013 season, Valpo owns a 14-3-5 record at home and is 23-7-7 all-time on the artificial surface of Brown Field.

Craven Back For More: Senior midfielder Rita Craven returns for her final season already the most decorated player in program history. Craven was named as one of 28 players to the preseason MAC Hermann Trophy Watch List, the first Crusader ever to earn a spot on the watch list for collegiate soccer’s most prestigious award. Last year, Craven became the first player in Valpo history to earn All-American honors, as she was named an NSCAA Third Team All-American. In addition, she was an NSCAA First Team Scholar All-American, as well as the Horizon League’s Player of the Year and Offensive Player of the Year.

More Honorees Return: Craven is far from the only player to receive honors for her work last season returning in 2015 for Valpo, however. All four of the Crusaders’ NSCAA All-Region honorees are back this year, as senior Jenny Fassbinder and juniors Cronin and Shelby Oelschlager were all Second Team All-Region choices. Both Fassbinder and Oelschlager started all 20 games on defense last year, while Cronin led the Crusaders with nine goals scored. Galvez-Daley is back as well, a Second Team All-League pick by the league and the league’s Defensive Player of the Year as chosen by College Sports Madness, while Vanesa Abad (6 goals, 1 assist) returns for her sophomore season after being named the Horizon League Freshman of the Year last year. In addition, Morgan Manzke – the 2013 Horizon League Newcomer of the Year – returns as well after using last season as an injury redshirt year.

Roster Breakdown: This year’s Crusader squad brings back 18 players from last season’s roster, 16 of whom saw action last year and eight of whom were regular starters. In addition, nine newcomers – one transfer and eight freshmen – join the fray as well.