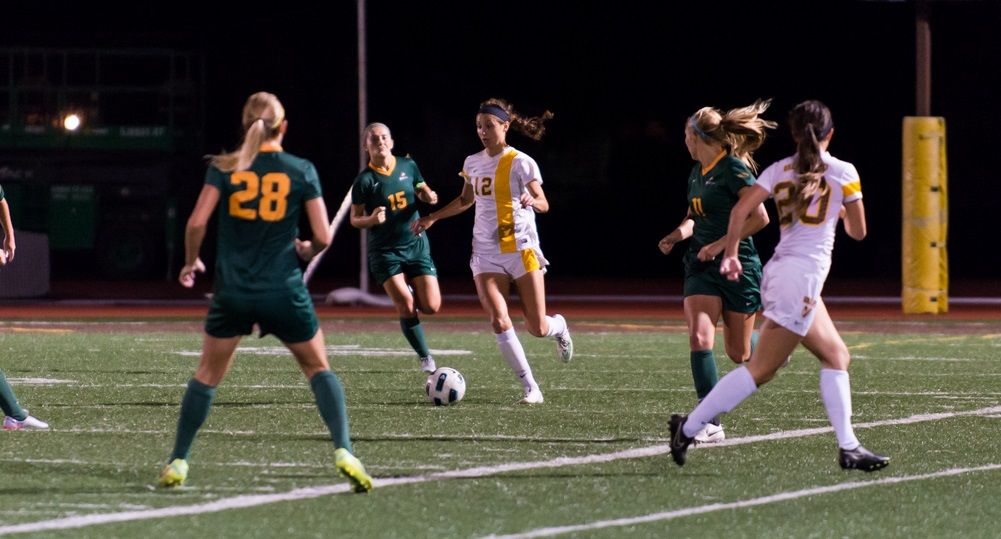 The Valparaiso University women’s soccer team opened defense of its Horizon League crown Saturday night at Brown Field, and for the fifth straight game the Crusaders went into double overtime, this time ending in a 1-1 draw with Wright State.

"I thought we played a nice game tonight - our team had a tremendous competitive spirit and good fight in them, and we brought a great level of intensity,” said Crusader head coach John Marovich. “The performance overall again was quite good. But we again have to look at the finishing in the attacking third – we need to be better at that and need to be able to put away our chances.”

The first half saw the Crusaders out-shoot Wright State (3-4-1, 0-0-1 Horizon) by a 9-4 count, but the Raiders saved all four of Valpo’s attempts on frame, including a clearance by a defender off the back line in the 37th minute.

But Valpo would break through in the 50th minute. A scramble in the box ensued off of a close-range free kick, and the ball eventually found senior Rita Craven (Frankfort, Ill./Lincoln-Way North), who tucked it in from six yards out for her fourth goal of the season. Sophomore Morgan Manzke (Orland Park, Ill./Sandburg) earned the assist on Craven’s goal, her second helper on the year.

The lead was short-lived, however, as Wright State got on the board in the 56th minute. The Raiders’ Bryce Hueber leveled the match with a nice individual effort, cracking a shot from 30 yards out that found the upper-left corner of the goal to make it a 1-1 contest.

Valpo would pile on the pressure in search of the match-winner, as the Crusaders ended the night with a 20-7 advantage in shots and a 13-0 edge in corner kicks. The Crusaders had a couple stellar chances in the first overtime period, but were left wanting for the golden goal, as junior April Cronin (Glenview, Ill./Glenbrook South) had an effort pushed wide by a diving effort from WSU goalkeeper Halle Pyle in the 95th minute and freshman Kelsey Jahn (Oregon, Wis./Oregon) hit the crossbar in the 96th minute.

Pyle ended the night with nine saves for Wright State, as the Raiders totaled 10 saves as a team. Crusader junior Sydney Galvez-Daley (Chicago, Ill./Fenwick [Creighton]) made a pair of saves in the draw for Valpo. The physical affair saw 37 total fouls called, including 23 on Wright State.

“I felt our back line was quite good tonight,” said Marovich. “Robin Wenzel handled Wright State’s #10 and her pace very well, and everyone did a good job winning balls in the air and then coming down with the second balls. We just need to continue our process and not allow tonight’s final result to frustrate us. We do need to be a bit better at finishing and with our final touch, but we definitely see a lot of positive things out of tonight.”

Due to the postponement of the game from Friday to Saturday night, Valparaiso (2-3-3, 0-0-1 Horizon) will no longer play its scheduled game Sunday versus Indiana State, as that contest has been canceled. The Crusaders return to action next Saturday evening at Youngstown State, a match set for a 6p.m. CT kickoff.