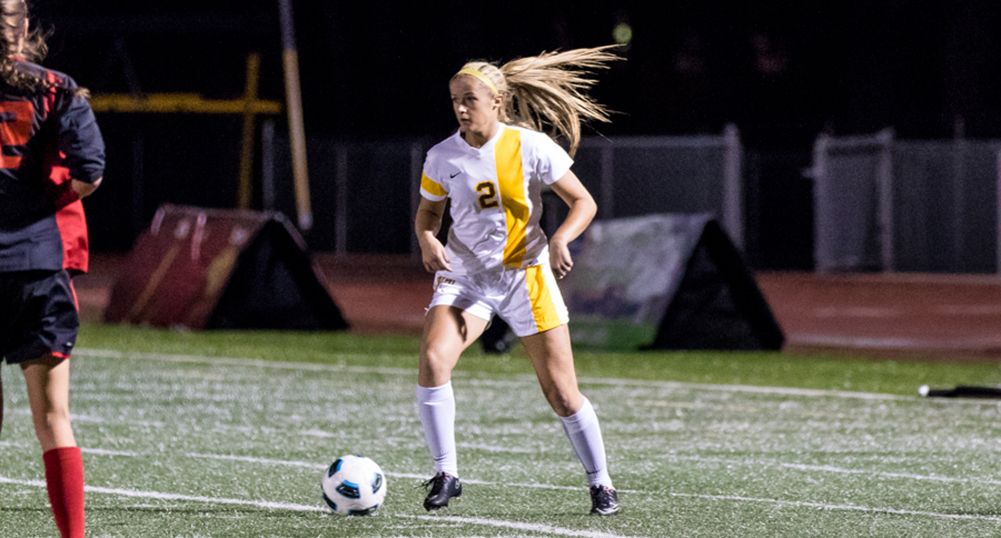 Cory Griffith scored a brace for the Crusaders on Saturday.
Valparaiso at Youngstown State | September 26, 2015

The Valparaiso University women’s soccer team put together one of the most prolific offensive performances in program history Saturday to earn a 6-0 road victory in Horizon League play at Youngstown State.

The Crusaders found the back of the net six times on Saturday, tied for the second-most goals in a single match in program history and the most since a six-goal performance against Lipscomb in 2005. In addition, the six-goal margin of victory also ties the second-largest in program history, matching a 6-0 win Valpo earned over UT-Martin in 2000.

Junior April Cronin (Glenview, Ill./Glenbrook South) got the scoring started Saturday evening with the game’s opening goal on 24 minutes. Cronin gathered a deflection in the six-yard box and tucked it away to give the Crusaders the lead. Valpo doubled its lead in the 35th minute, as sophomore Sydney Gountounas (Tinley Park, Ill./Andrew) served the ball into the box, where freshman Cory Griffith (Lemont, Ill./Providence Catholic) brought it down with her first touch at the back post and put it away with her next touch.

“I thought it was a good overall performance by the entire team today,” said Marovich. “After the first 10 minutes, we really settled into the game and really started to work the tactical plan. It was nice to see goals early – to get two goals in the first 35 minutes definitely changes the complexion of the game. I thought Sydney had a really good service on our second goal, and Cory’s finish was really well-done under pressure.”

Griffith earned her brace as she found the back of the net for the third time on the season in the 57th minute. This time, sophomore Grace Rogers (Woodbury, Minn./Woodbury) got to the end line and sent a cross towards the near post, where Griffith ran onto it to make it 3-0. Just 2:16 later, senior Rita Craven (Frankfort, Ill./Lincoln-Way North) served a long ball into the center of the box, a ball which junior Michelle Mottonen (South Barrington, Ill./Fremd [TCU]) gained possession of and finished for her first goal as a Crusader.

Valpo made it five in the 79th minute off a set piece. Redshirt freshman Jordon Tindell (Jacksonville, Fla./Bishop Kenny) delivered a ball from 20 yards out towards the back post. Redshirt junior Shelby Oelschlager (Glendale, Ariz./Mountain Ridge) got free of any defenders and went up unmarked, nodding the ball home into the upper 90 for her first career goal. The Crusaders added a sixth in the 87th minute on a goal that went down as an own goal against the Penguins, a ball on which redshirt sophomore Kelsie Bolerjack (Centerville, Ohio/Centerville) was in the mix on before it hit the back of the net.

“We saw the half out well, and then did what we needed to do in the second half with Youngstown State being down a player,” said Marovich. “I thought Rita’s play to Michelle made a great goal and it was a well-deserved goal for Michelle – she did a great job tonight, bringing fantastic energy and effort. I was happy for Shelby to be able to score her first career goal as well – she’s worked hard and it was nice to see her work on set pieces pay off, finding good space and finishing with quality.”

Valpo out-shot Youngstown State (5-6-0, 0-2-0 Horizon) 20-4 on the evening, while the Crusaders held the Penguins without a shot on goal. YSU goalkeeper Elizabeth Balgoyen made four saves in the losing effort, while junior Sydney Galvez-Daley (Chicago, Ill./Fenwick [Creighton]) played 65 minutes in goal for Valpo before freshman Drew Moulton (Sycamore, Ill./Sycamore) played out the last 25 minutes at goalkeeper. 20 different players saw action for the Crusaders in the win.

“I felt like, even though she wasn’t in on any of our goals, that Vanesa Abad had a really good game tonight as well,” said Marovich. “She worked very hard and really executed our tactical plan to a T. She was able to do a lot of good work for us down the right-hand side because she stuck to the plan. On a whole, it was really heartening to see that the things we created tonight were things taken directly from what we worked on during training this week. We did a great job taking the work on the training field and executing it during the game.”

Valparaiso (3-3-3, 1-0-1 Horizon) returns home to Brown Field Wednesday evening as the Crusaders host UIC at 7:30 p.m. The game will be seen live on ESPN3.com, with a link for live stats available at ValpoAthletics.com.