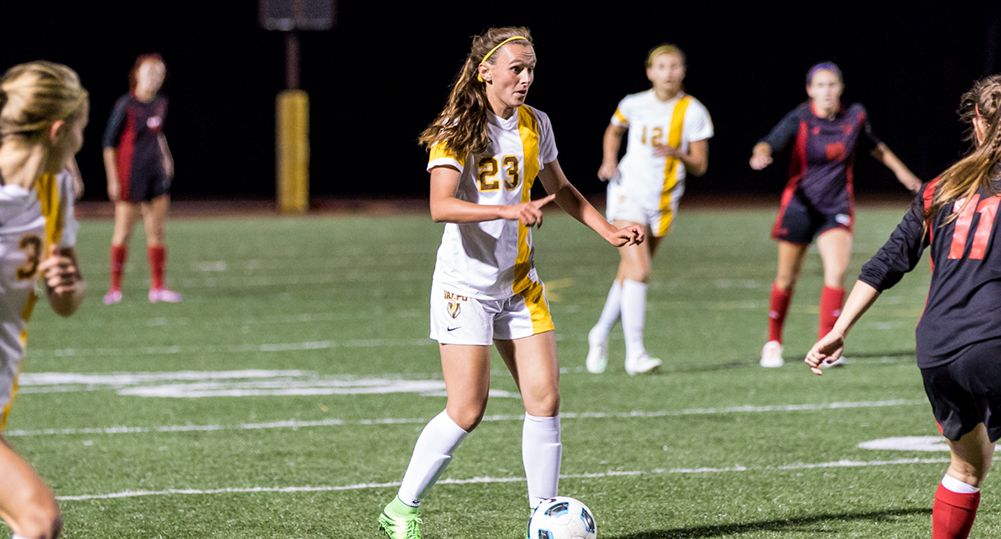 Morgan Manzke found the back of the net for the first time this year Saturday.
Valparaiso at Oakland | October 03, 2015

For the first time since October of 2013, the Valparaiso University women’s soccer team suffered a loss within Horizon League play, as the Crusaders were unable to hold onto a one-goal lead in an eventual 3-1 defeat at Oakland Saturday evening in Rochester, Mich.

But the Golden Grizzlies struck back for two goals in the opening half to earn a 2-1 lead at the break, as Nessa Ogbonna scored in the 23rd minute off a long free kick from goalkeeper Emily Zweng and Katy Wagner put Oakland ahead in the 39th minute. The Golden Grizzlies added an insurance goal from Sydney Duggan in the 79th minute to close out the scoring.

Both teams were credited with nine shot attempts in Saturday night’s contest, with Oakland (3-5-5, 2-1-1 Horizon) putting seven on goal to the Crusaders’ four. Valpo goalkeeper Sydney Galvez-Daley (Chicago, Ill./Fenwick [Creighton]) made four saves in the losing effort, while Zweng stopped three shots for the Golden Grizzlies.

“I thought we had a really good start to the game,” said Crusader head coach John Marovich. “We had a lot of opportunities in the first 22 minutes - we scored our goal, Rita Craven headed one off the post and Jenny Fassbinder got to the end line several times down the right-hand side to create chances. We weren’t able to put away that second goal, though, and the mistakes we made tonight we got punished for. We gave away goals tonight, and the result ended up being up being the way it was – it’s unfortunate, but we have to keep moving on, regroup and get prepared for next weekend.”