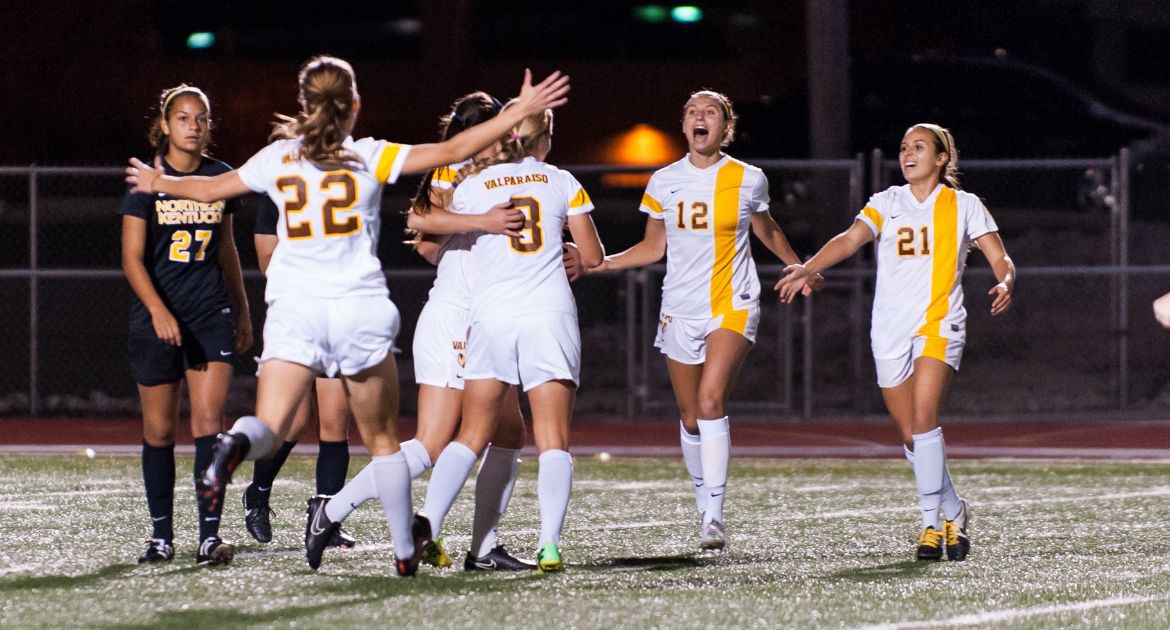 The Valparaiso University women’s soccer team dropped a Horizon League matchup to league newcomer Northern Kentucky on Brown Field Friday evening by a 3-2 final, as the Norse struck for the match-winning goal in the 101st minute.

The Crusaders got off to a fast start on Friday night, as junior April Cronin (Glenview, Ill./Glenbrook South) rifled a shot from the edge of the box past NKU goalkeeper Brooke Schocker just 68 seconds into the match. Cronin’s tally – her team-best sixth of the year – was the fourth-fastest goal to open a match in program history.

The match would stay 1-0 Valpo until the Norse struck twice within a span of 71 seconds in the second half. Hanna Pateryn intercepted a failed clearance and found the back of the net in the 59th minute, and Jessica Frey then made it 2-1 NKU with just under a half-hour to play. But the Crusaders pulled back level almost immediately, as redshirt sophomore Morgan Manzke (Orland Park, Ill./Sandburg) turned her defender from 20 yards out and beat Schocker to make it a 2-2 game.

Valpo had a pair of stellar opportunities at the match-winner in the final minute of the first overtime period. Just seconds into the 100th minute, Cronin struck an effort from outside the box that hit the crossbar. Then, with the clock ticking even closer to 100:00, Cronin sent a ball in along the ground from the end line that ricocheted off the far post, but was judged to have not fully crossed the goal line. NKU would strike for the match-winner just 45 seconds into the second extra period on a header from close range by Kelsey Laumann following a cross.

Valpo owned a slight 15-12 edge in shots over Northern Kentucky (8-3-0, 4-0-0 Horizon), but the Norse put nine shots on goal to the Crusaders’ seven. Sydney Galvez-Daley (Chicago, Ill./Fenwick [Creighton]) made six saves in goal for Valpo, while Schocker stopped five shots for NKU.

“I thought we gave a great team effort tonight and put together a good performance,” said Crusader head coach John Marovich. “We competed extremely hard, but we’re certainly disappointed that the result went against us. This is the way Horizon League play is, though, and we’ve just got to keep battling every time out and keep the right attitude as we move forward.”

Valparaiso (4-5-3, 2-2-1 Horizon) closes out the home weekend Sunday afternoon as the Crusaders host Loyola in their final non-league fixture of the year. It will be Senior Day for Valpo, as the program honors the members of its senior class prior to the game. Kickoff is slated for 1 p.m., and the game will be available live on ESPN3.com. Links for live audio and stats will be available as well via ValpoAthletics.com.