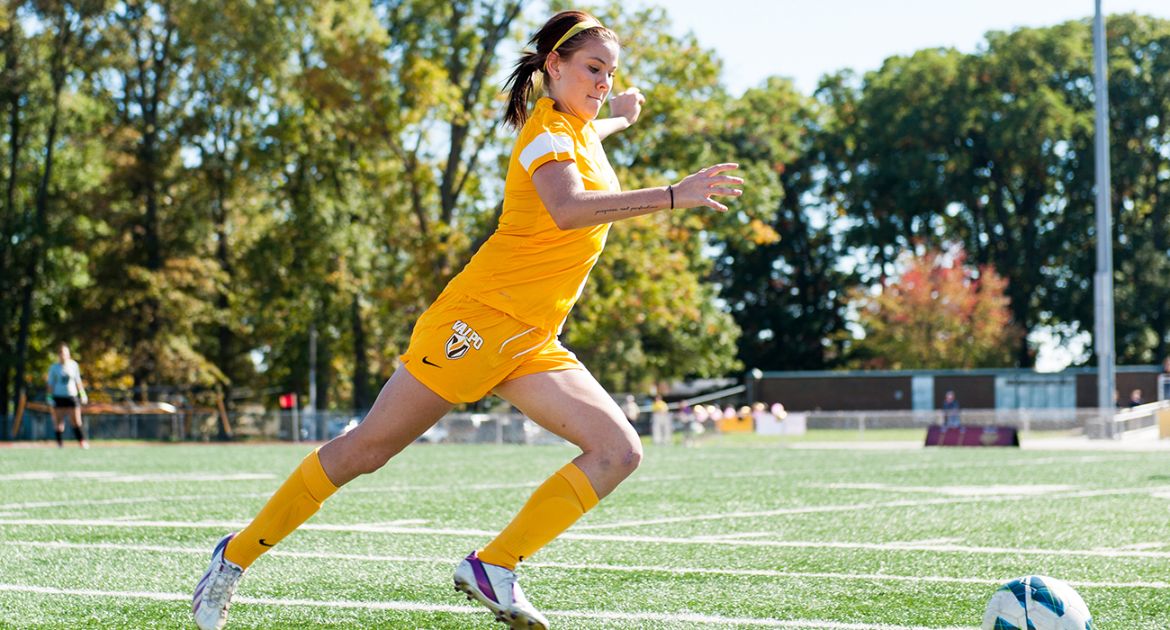 It was only fitting that, in their final match at home on Brown Field, a pair of seniors teamed up for the match-winning goal, as Shelby Oelschlager (Glendale, Ariz./Mountain Ridge) finished a cross from Jenny Fassbinder (Hudson, Wis./Hudson) in the 101st minute to give Valparaiso a 1-0 win over Cleveland State Friday evening. With the victory, the Crusaders assured themselves a berth in the Horizon League Championship, where they will be the fifth seed and play Monday at fourth-seeded Wright State.

With Wright State’s win over Detroit earlier in the day, the Crusaders knew when their match kicked off that either a win or a draw with the Vikings would put Valpo in the tournament field. But Valpo played the game like a team looking to earn all three points all the way, out-shooting CSU by a 28-9 margin, putting 12 shots on goal and earning 12 corner kick opportunities.

But for all their control of the game and their myriad of scoring chances, the Crusaders were left wanting for the one goal that would make the difference – that is, until that first minute of the second period of extra time. Oelschlager ran onto a clearance from CSU around midfield and took it herself about 20 yards before playing it out wide to Fassbinder.

As the Crusaders had looked to do all night long, Fassbinder gained the end line and sent a cross into the six-yard box, where Oelschlager – who had continued her run all the way from the back line – was bearing down on the near post. CSU goalkeeper Jamie Daniels attempted to push the cross away, but the ball hit Oelschlager’s legs in traffic and popped up in the air. With two defenders around her and the Viking keeper on the ground, it was Oelschlager who got a foot to the ball and knocked it into the back of the net for the match-winner.

“I felt like in the second half, we did a much better job of connecting through the midfield and then allowing those connections to get out wide,” said Crusader head coach John Marovich.  “I think using that speed out wide made a big difference for us tonight. We did a good job all night long of getting to the end line and created a lot of chances off of those moves – it just took 101 minutes to find the game-winner.”

While Valpo dominated the stat sheet, it was CSU who had a couple good early chances to crack the scoreboard first. The Vikings forced Crusader backup goalkeeper Drew Moulton (Sycamore, Ill./Sycamore) – making just her third career start – to come up with a save in the 10th minute, and then looked poised to score in the 12th minute. Vicki Havas made a move around Moulton at the top of the box and had an open net to shoot at, but hustling back defensively was sophomore Sydney Gountounas (Tinley Park, Ill./Andrew) to slide across the path of Havas’ shot and keep it out of the net.

The Crusaders had 10 first-half shots, six on goal and none of which looked like a better scoring opportunity than a header from Oelschlager off a corner in the 21st minute that looked destined for the far post until it hit a defender stationed on the line. Then, in the second half, Valpo peppered 15 shots, many of which seemed like they would be the effort to put the Crusaders on the board. Valpo forced Daniels into a pair of diving saves early in the half, and then in the 85th minute, Jordon Tindell (Jacksonville, Fla./Bishop Kenny) had a pair of point-blank efforts turned away by Daniels, one of which popped straight up into the air and down into Daniels’ arms as she was laying on the ground. An 87th minute rocket by Rita Craven (Frankfort, Ill./Lincoln-Way North) found only the crossbar as well as the game was scoreless through regulation.

Moulton would make a pair of saves in goal for Valpo to earn her first career victory and her first career clean sheet. Daniels stopped 10 shots for Cleveland State (8-9-1, 4-5-0) to keep the Vikings, who had secured a league tournament berth earlier in the day, in the match.

“Drew came in tonight and really stepped up for us,” said Marovich. “She handled the situation extremely well – she was calm in goal and did a really good job keeping her back line organized. I’m really proud of her, because that’s exactly what you want your goalkeeper to do, and she rose to the occasion tonight when we called on her. I thought Jordon had a really nice game tonight as well – we played a lot of connecting passes through her, and she settled the game down and played very well in the second half.”

Valparaiso (7-7-3, 4-4-1 Horizon) looks to defend its Horizon League tournament crown from last year starting on Monday at Wright State at 6 p.m. CT. Options to follow the match will be announced in the coming days.

“You go through a season that has a lot of ups and downs, but at the end of the day, we’re about to start a new season – everybody’s 0-0, and you have to just keep bouncing back,” said Marovich. “We’ve learned a lot of valuable lessons throughout the course of the year, and hopefully we put them to use on Monday, we have a nice game and play with a tremendous amount of heart.”