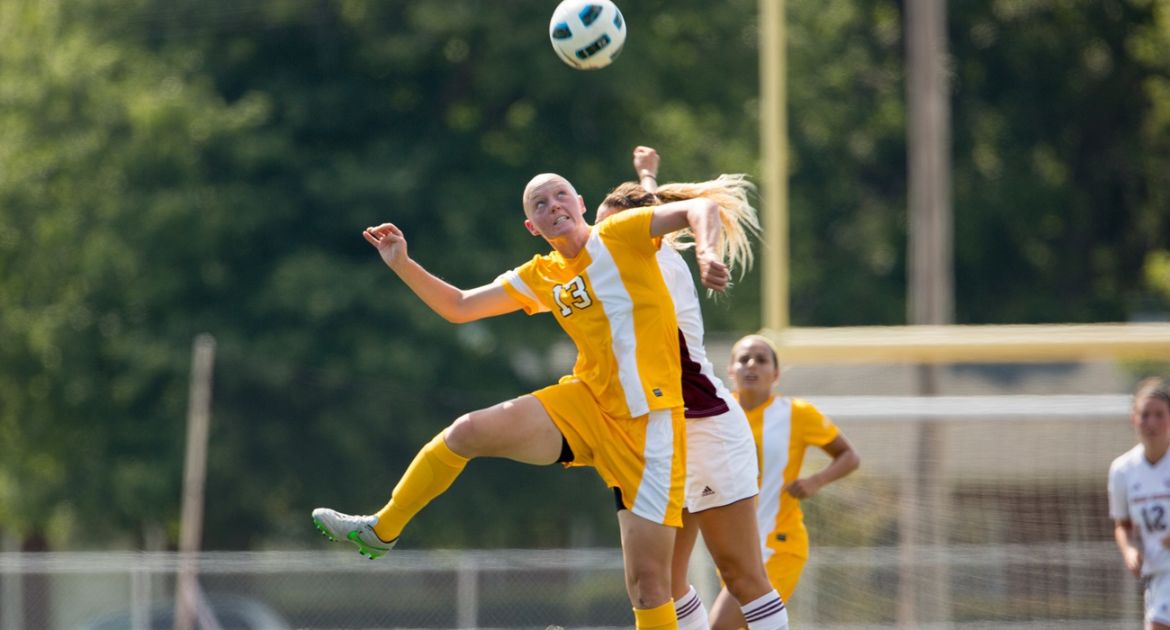 Sarrah Ludwig scored late to bring the Crusaders back within a goal.
Valparaiso at Wright State | November 02, 2015

The Valparaiso University women’s soccer team carried the majority of the play in its Horizon League Championship first-round matchup at Wright State Monday night, but the Raiders would eventually come out on top, as the Crusaders fell 2-1 to end their season.

After a feeling-out period by both sides in the early going Monday, it was the Crusaders who controlled the possession battle as the first half passed the midpoint, but it was Wright State which would earn the game’s first goal. Valpo goalkeeper Drew Moulton (Sycamore, Ill./Sycamore) and her defense combined to help keep the Raiders out of the net on their first couple efforts just past the half-hour mark, but eventually WSU cracked the scoreboard, as MacKenzie Hamilton sent a curling shot from 25 yards out that dipped underneath the crossbar to give the Raiders a 1-0 lead.

“I thought that we came out and had a very good start to the game, had some good possession,” said Crusader head coach John Marovich. “Unfortunately, Wright State got a goal which really took us a bit to recover from as we moved into halftime.”

As the match moved into the second half, it was the Crusaders applying the pressure looking for the equalizer, as Valpo out-shot Wright State in the final 45 minutes, 13-4. But it was the Raiders who scored the next goal, as Hamilton finished a cross from Aaliyah Patten in the 71st minute to make it a 2-0 game. The Crusaders were able to pull a goal back late on, as a pair of seniors teamed up – Jenny Fassbinder (Hudson, Wis./Hudson) sent in a cross which Sarrah Ludwig (Downers Grove, Ill./South) headed home inside the far post from just inside the 18-yard box to cut the deficit  to 2-1. But following the goal in the 88th minute, Valpo was unable to find one more late tally to send the game to extra time.

“I thought in the second half, we certainly created several chances to get ourselves even,” said Marovich. “As it got later, we had to press a bit more, and unfortunately gave away a second goal. I was proud of the way we kept going though – we never quite and were able to find a goal late, and even got into the box one more time after that and had a potential chance to even the game.”

For the game, Valpo held a 20-12 edge in shot attempts over Wright State (9-7-1) and put seven shots on goal to the Raiders’ five. WSU goalkeeper Halle Pyle made six saves, while Moulton was credited with two saves for the Crusaders. Valparaiso (7-8-3) also earned four corners in the second half to finish with a 6-5 edge in that category.

“It’s disappointing for this to be it,” said Marovich. “It’s bittersweet for our senior class - they’ve done a lot of special things to help elevate the program and raise the expectations surrounding it. So it’s now a sad day that we see them go, but they certainly have left their mark on the program, and we’re thankful for the time we got to spend with them.”