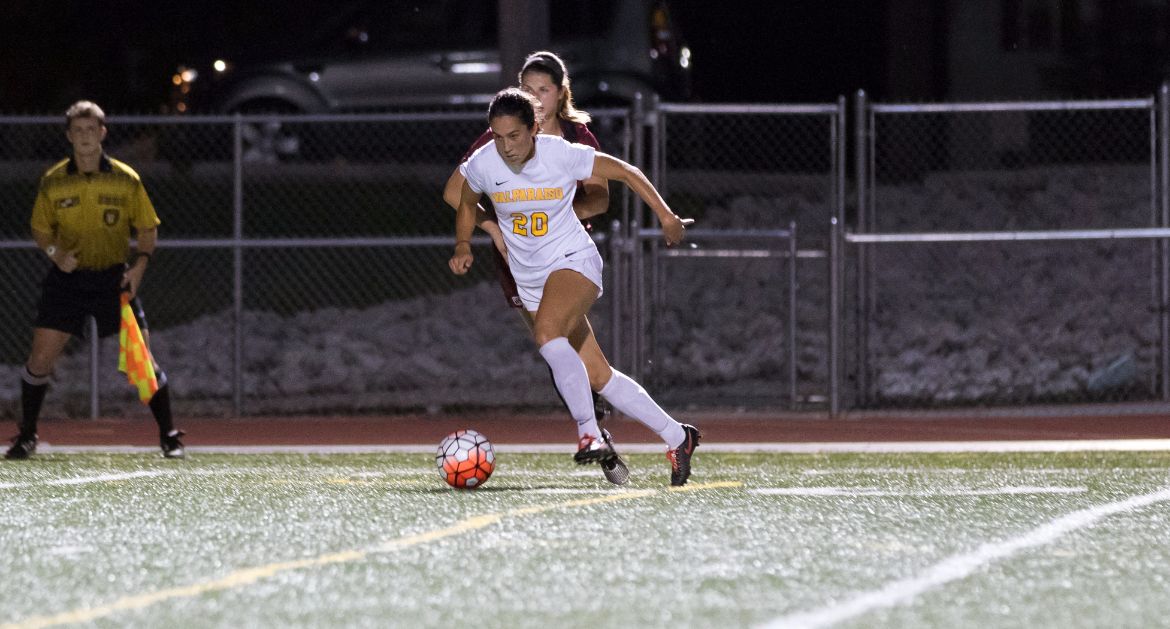 Valparaiso University senior April Cronin (Glenview, Ill./Glenbrook South) became just the fifth player in program history to net a hat trick and the first player since Brittany Derksen and Kendall Brown did so in 2005, capping her three-goal performance Sunday afternoon with a golden goal in the 105th minute to give the Crusaders a 3-2, come-from-behind victory at Loyola.

“I’m extremely proud of this group for battling back today, not just once but twice. Those moments of adversity, when met with consistent and tireless effort regardless of situation, produce opportunities. Our entire team, from April’s hat trick to Tess stepping up in goal to the bench for constant support, lived the culture we want. Our result is a complete team effort and couldn’t have been achieved without everyone having belief of purpose.”

“We had a positive and good start to the match, creating many dangerous situations. I’m pleased with the attacking ideas and we executed the tactical plan early. We must continue to work on the final touch in the box so we can produce goals for the movement in the attacking third.”

“April capitalized on her opportunities today. Her game-winner was her taking the leadership role and responsibility to get the team a result. Her team battled for so long and so hard today, that it was great to see her burst of energy late to recognize and reward their effort.”

“Beyond April, it was nice to see many others making positive contributions today. Cory Griffith followed her two-goal performance on Friday with five shots today, and Michelle Mottonen was a strong attacking presence as well. The back line and midfield were integral to our success as well, challenging every 50/50 ball and working to win second balls.”

The Crusaders (2-2-0) travel to Lincoln, Neb. for the Cornhusker Classic next weekend. Valpo will take on Saint Louis on Friday and Kansas on Sunday.