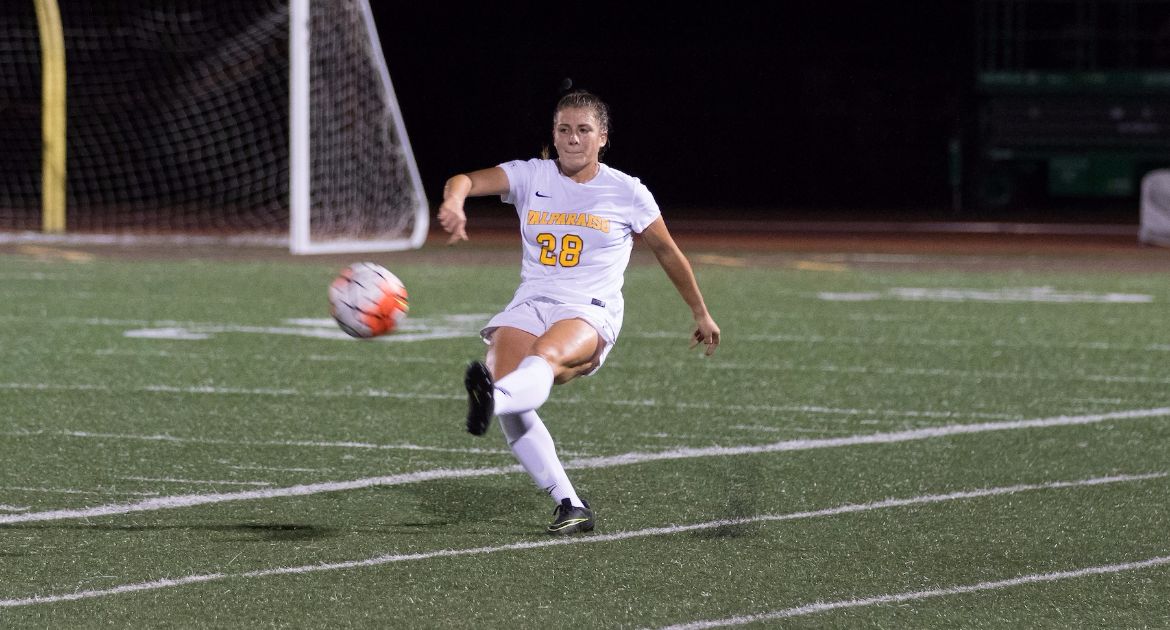 Natalia Kontul and the Crusaders gear up for two more matches this weekend.
IPFW at Valparaiso | September 09, 2016
Valparaiso at Western Michigan | September 11, 2016

This Week in Crusader Soccer: The Valparaiso University women's soccer team faces two final tuneups this weekend before the start of Horizon League play, as the Crusaders host Fort Wayne Friday night before making the short trip to take on Western Michigan on Sunday afternoon.

Previously: Valpo dropped a pair of matches last weekend against tough competition at Nebraska. The Crusaders fell 1-0 to a regionally-ranked Saint Louis squad and lost 2-1 to Kansas.

Following the Crusaders: Both matches this weekend will have live stats available through ValpoAthletics.com. In addition, WVUR (95.1 FM, Valparaiso) will carry Friday night's game versus Fort Wayne.

Head Coach John Marovich: The 2014 Horizon League Coach of the Year, John Marovich holds a 75-56-27 record both overall and with Valpo in his ninth season at the helm of the Brown and Gold. Just the third head coach in program history, Marovich is just three wins shy of moving into a tie as the program's all-time winningest coach.

Series Notes: Fort Wayne - The Crusaders own a commanding 11-2-1 advantage in the all-time series with the Mastodons, including wins in each of the last eight matchups. Valpo earned a 1-0 win in Fort Wayne in September of 2014 on a Rita Craven goal in the last meeting between the two sides.

Scouting the Opposition: Fort Wayne - The Mastodons enter Friday night's game with a 2-4-0 record on the year, most recently falling 1-0 at Wright State. Counting exhibition play, Friday's match will be Fort Wayne's fourth of the season versus Horizon League competition, as the Mastodons dropped a 3-1 decision to Oakland in the preseason and won at Youngstown State by a 4-3 final.

Western Michigan - The Broncos have earned a spot in the NSCAA Great Lakes Region poll early on in the 2016 campaign with a strong start to the year, as they own a 4-1-0 overall record with a 3-0 loss at Notre Dame their only blemish. WMU will play at Loyola Friday evening before hosting the Crusaders on Sunday.

First Career Goal: Freshman Adi Johnson, playing in just her sixth career game, found the back of the net last time out against Kansas in the 64th minute. She became the third Crusader to score a goal this season and was the first member of this year's freshman class to tally a point.

Third Time's the Charm: Senior April Cronin became just the fifth player in program history to score a hat trick when she accounted for all three of the Crusaders' goals in the win at Loyola. Cronin's 84th-minute goal forced extra time, with her 105th tally proving to be the golden goal. For Cronin, it was the first multi-goal game of her career and gives her 20 career goals, tied for third-most in program history and just one shy of second position.

Hat Trick Tidbits: Cronin became the first Crusader to score a hat trick since the 2005 campaign, when Brittany Derksen (vs. Lipscomb) and Kendall Brown (at Cleveland State) did so within nine days of each other. The senior is just the second Valpo player to account for all of her team's scoring with a hat trick (Beth Muskovich, at DePaul, 1996) and is the first to tally a hat trick in a one-goal game.

Weekly League Honors: Cronin also assisted on the match-winning goal in the win over New Mexico State, giving her seven points total for the weekend. She was named the Horizon League Offensive Player of the Week on Sept. 29, her first weekly award from the league office. In fact, Cronin was the first Crusader to earn the offensive weekly honors since the league split offense and defense in 2012.

Griffith Tallys Two: Cronin's heroics on Sunday partially overshadowed the work of sophomore Cory Griffith versus New Mexico State. Griffith came off the bench at halftime and found the back of the net in the 64th and 69th minutes to account for all of the scoring in the Crusaders' 2-0 win. The sophomore now owns five career goals after recording the second brace of her career and the 42nd two-goal performance in program history.