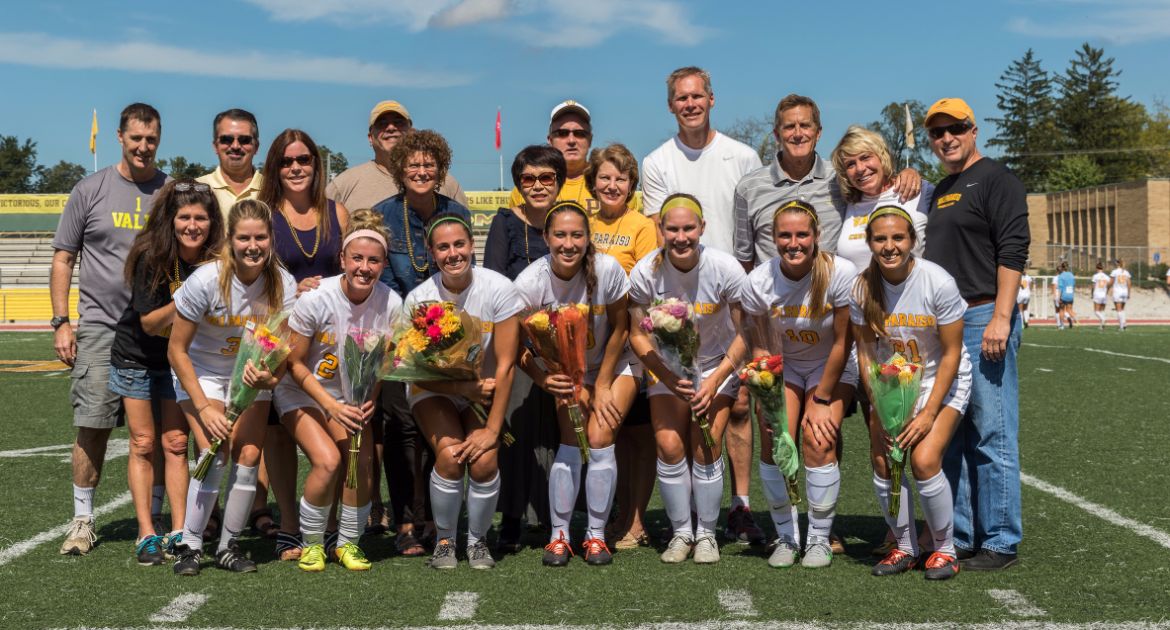 The Crusader seniors with their parents prior to the Senior Day game.
Morehead State at Valparaiso | September 18, 2016
Related Links
Related Links

The Valparaiso University women’s soccer team closed out its non-league schedule on Sunday in victorious fashion, getting a golden goal from sophomore Cory Griffith (Lemont, Ill./Providence Catholic) in the 105th minute to defeat Morehead State at Brown Field, 2-1. The win came on Senior Day for the Crusaders, as seven members of the senior class were honored prior to the game, and with the victory, head coach John Marovich moved into a tie atop the Crusader record books as the winningest coach in program history.

“I’m happy that we were able to get the results for our seniors today. It’s always really important to us to get a result on Senior Day!”

“We created several dangerous opportunities on set pieces very early in the match, which is a result of work during the week of preparation. It was great to see the execution, but we just couldn’t get that last touch past the keeper.”

“Once we conceded the goal to halve the match, it was good to see our players respond positively to adversity and continue to battle and create goal-scoring opportunities. That persistence paid off as we got the winning goal in overtime from that pressing mentality.”

The Crusaders (5-5-0) return to Horizon League play for the duration of the regular season, starting Saturday night when they host Detroit at Brown Field. Kickoff is slated for 7 p.m., and the game can be seen live on ESPN3, WatchESPN and the ESPN app. Links for the live video and live stats will be available via ValpoAthletics.com.