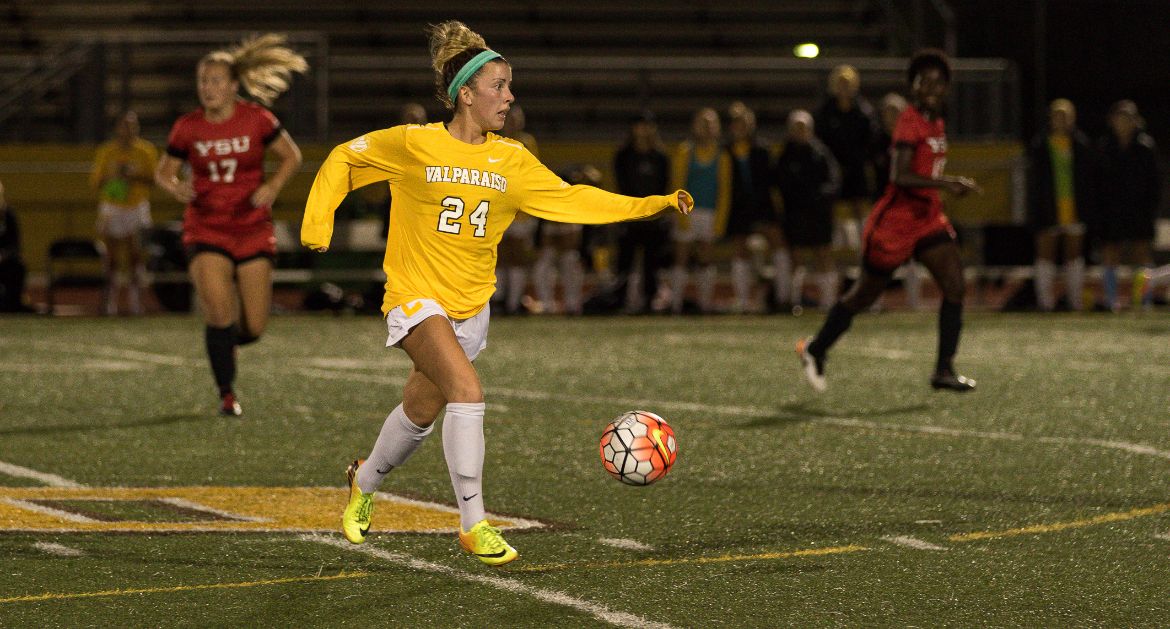 This Week in Crusader Soccer: With three regular season matches remaining, the Valparaiso University women's soccer team enters the week in a three-way tie in the league standings and will face off this week against both sides it is currently tied with. The Crusaders make the short trip to Chicago Wednesday night to face UIC before returning home to Brown Field for the regular season home finale against Oakland Saturday night.

Previously: A goal in the 79th minute proved to be the difference on Saturday evening, as Youngstown State handed the Crusaders a 1-0 loss on Brown Field.

Looking Ahead: Valpo closes out the regular season on Friday, Oct. 28 as it makes the trip to Highland Heights, Ky. to face Northern Kentucky.

Following the Crusaders: Live stats for both matches this week will be available via ValpoAthletics.com.

Series Notes: UIC - The Crusaders have won both meetings with the Flames since UIC started a women's soccer program prior to the 2014 season. Last year, playing at Brown Field, Valpo earned a 3-1 victory as Vanesa Abad broke the tie in the 75th minute.

Oakland - Valpo is just 5-9-1 all-time against the Golden Grizzlies, while Oakland has won two of three meetings since it joined the Horizon League - including a 3-1 win at Oakland last season. The only prior meeting between the two sides at Brown Field came in September of 2014, a 3-0 Valpo victory.

Scouting the Opposition: UIC - The Flames enter Wednesday's match with a 5-8-2 overall record this year and sit tied with the Crusaders at 3-3-0 in Horizon League play, most recently falling 4-0 against Northern Kentucky. Rebeca Pallo leads the UIC offense with six goals, while at goalkeeper, Kelly Fritz and Annie DiCanio have split most of the action - Fritz owning a 1.35 GAA and a .756 save percentage.

Oakland - The Golden Grizzlies enter the week at 6-8-1 overall and 3-3-0 in league action, with a visit to Detroit Mercy on the mid-week docket before coming to Valpo. Sydnye Gagner has scored nearly half of Oakland's goals this season, finding the back of the net eight times. In goal, Alison Holland has started 13 of 15 matches and owns a 1.06 GAA and an .817 save percentage.

A Crowded Table: The Crusaders sit in a three-way tie for fifth place entering this week, sharing a spot in the league table with Oakland and UIC on nine points through six games. With Detroit Mercy and Wright State both on 14 points directly ahead of the three-way tie the Crusaders are involved in, it looks more likely that one of the three teams currently tied for fifth will be left out of the league tournament field - as only six teams make the Horizon League Championship.

Cronin Scores Again: Senior April Cronin extended her team-high goal total at Wright State, finding the back of the net in the 47th minute for the Crusaders. The goal was Cronin's seventh of the year, while she also owns a team-high 17 points - moving onto the Crusaders' top-10 single-season charts in both categories. Cronin also sits in second place alone in program history in both career goals (24) and points (57), and is tied for second in match-winning goals with nine, just one off the school record.

Scoring the Clincher: Sophomore Cory Griffith has made a habit recently of scoring the goal which ends up being the deciding goal in victories. Griffith netted the match-winner in both of Valpo's wins in league play over the Wisconsin schools, scoring in the 99th minute for the golden goal in the win over Milwaukee before opening the scoring in the 59th minute in the eventual 2-0 Crusader win at Green Bay. Griffith, who owns the match-winner in the Crusaders' last three victories, now has four match-winning goals on the season to tie a program single-season record.

Marovich Sets Wins Record: The dramatic win over Milwaukee was extra-special for the leader of the Crusaders. Head coach John Marovich won his 79th career match with the victory over the Panthers, becoming the winningest coach in Valpo women's soccer history as he surpassed his predecessor, Stephen Anthony. Marovich, who now has 80 victories, also holds the program record for winning percentage by a head coach (.563).

Weekly League Honors: Griffith was tabbed the Horizon League Offensive Player of the Week on Oct. 3 for scoring the pair of match-winners, becoming the third Crusader to earn the honor this season. Ava Porlier received the award earlier this year for her two-goal performance at Western Michigan, while April Cronin picked up the honor early on following a seven-point weekend - including her hat trick at Loyola. Entering this year, Valpo had not earned a Horizon League Offensive PoW award since the league split offense and defense in 2012.