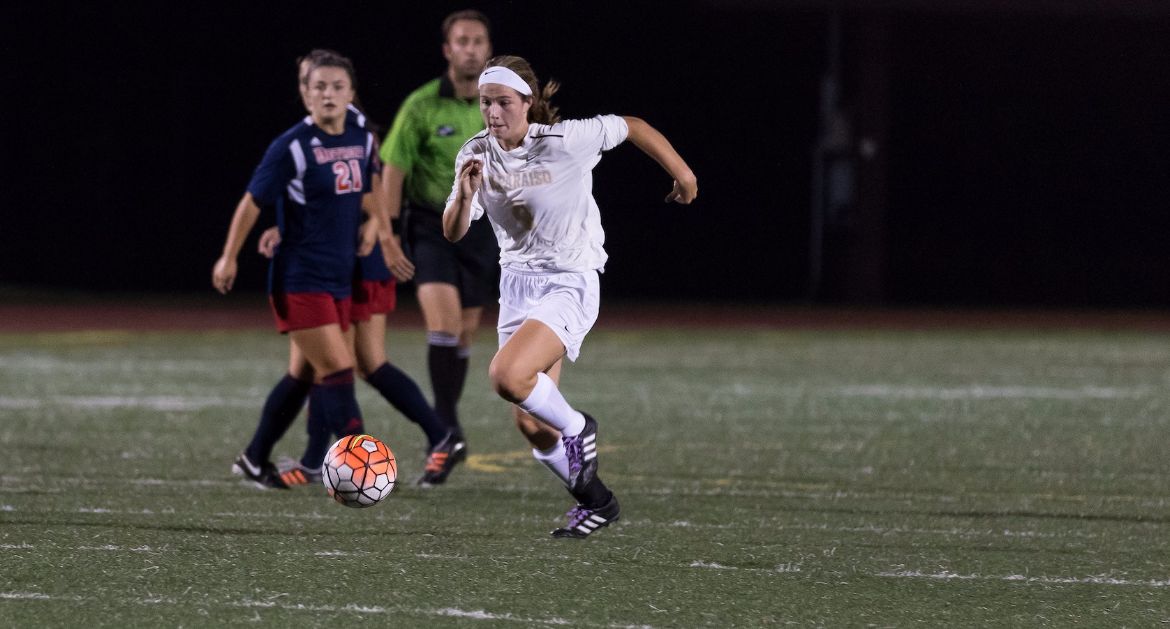 Adi Johnson and the Crusaders open the regular season this weekend.
Grace at Valparaiso | August 18, 2017
IUPUI at Valparaiso | August 20, 2017
Valparaiso (0-0-0, 0-0-0 MVC)
Crusaders kick off milestone campaign with pair of home matches
Friday, Aug. 18 - 7:30 p.m. – Brown Field - Grace (0-0-0, 0-0-0 Crossroads)
Sunday, Aug. 20 - 1 p.m. – Brown Field – IUPUI (0-0-0, 0-0-0 Horizon)
This Week in Crusader Soccer: The 25th season of action for the Valparaiso University women's soccer team kicks off this weekend with a pair of matchups at Brown Field. The Crusaders host Grace College to open the season on Friday night before welcoming IUPUI to campus on Sunday afternoon.
Previously: In its lone exhibition match, Valpo claimed a 4-1 victory over Morehead State, scoring the first four goals of the game - including two from Cory Griffith. Tahelah Noel and Jordon Tindell added goals as well as 25 different players combined to earn the win.
Looking Ahead: A jaunt to the Sunshine State is in the cards next weekend, as Valpo heads to Boca Raton for the Owl Classic. The Crusaders will face FGCU on Friday afternoon before taking on host Florida Atlantic on Sunday afternoon.
Following the Crusaders: Both matches this weekend will have live stats available through ValpoAthletics.com.
Head Coach John Marovich: The 2014 Horizon League Coach of the Year, John Marovich holds an 82-62-27 (.558) record both overall and with Valpo entering his 10th season at the helm of the Brown and Gold. Just the third head coach in program history, Marovich became the winningest coach in program history midway through last season.
Series Notes: Grace - First Meeting
IUPUI - Valpo will look to extend its dominant record against the third-most common opponent in program history on Sunday, as the Crusaders are 10-4-4 all-time against the Jaguars. Valpo is looking for its first win in the series since 2012, however, as the Crusaders are 0-1-2 in the last three meetings with IUPUI, including a 2-0 defeat last season in Indianapolis.
Crusaders Picked Fifth in Preseason Poll: Valpo has been chosen to finish in a tie for fifth place in the MVC preseason poll, as voted on by the conference’s head coaches. The Crusaders totaled 29 points in the preseason polling to tie UNI for fifth place. Illinois State received all but one first-place vote to top the poll, while Drake picked up the other first-place nod and was second in the polling.
Looking Back at 2016: The Crusaders are coming off of a 9-10-0 record in 2016, including a 5-4-0 mark within Horizon League play – good for a tie for fourth place. April Cronin earned First Team All-League honors as she closed out her stellar career with team highs of eight goals, five assists, and 21 points, departing Valpo second in program history in career goals and points and third in assists. Second Team All-League selection Cory Griffith struck for seven goals and three assists as a sophomore. Five of Griffith’s seven tallies were match-winners, setting a new Valpo single-season record.
Reaching A Milestone: The Crusaders celebrate a quarter-century of competition this fall, as the 2017 campaign is Valpo's 25th season of intercollegiate women's soccer. The Crusaders first took the field on Sept. 4, 1993 at Michigan State.
Valpo In The Valley: The 2017-18 school year is also a significant season for the Valpo athletics department as a whole, as on July 1, Valparaiso University became a member of the Missouri Valley Conference following a decade of membership in the Horizon League. The move to The Valley dovetails nicely with the soccer program's 25-year celebration, as the MVC is celebrating 25 years of women's competition in the conference as well.
Experience Returning: Among the 18 letterwinners returning for the Crusaders in 2017 are eight of last season's 11 most regular starters. The team features plenty of new blood as well, however, as nine players are in their first season at Valpo - seven freshmen and two transfers.
An Early Start: Friday night's season opener against Grace comes on August 18, marking the second-earliest start to a season in program history. The 2012 squad opened play at Brown Field on August 17 against IUPUI, earning a 1-0 victory.
Griffith Leads the Way: After playing alongside April Cronin last season, junior Cory Griffith will be called upon to lead the Crusader attack in 2017. A preseason All-MVC selection, Griffith is coming off a campaign in which she earned Second Team All-Horizon League accolades, scoring seven goals - five of which were match-winners.
Returning Honorees: Two other players who earned postseason accolades from the Horizon League return in 2017 for the Crusaders as well. Ali Quillen was one of two Crusaders to start all 19 matches in 2016 and led the team in minutes played, earning a spot on the Horizon League All-Freshman Team. She was joined on the All-Freshman Team by Ava Porlier, a midfielder who scored a pair of goals against regionally-ranked Western Michigan last season.