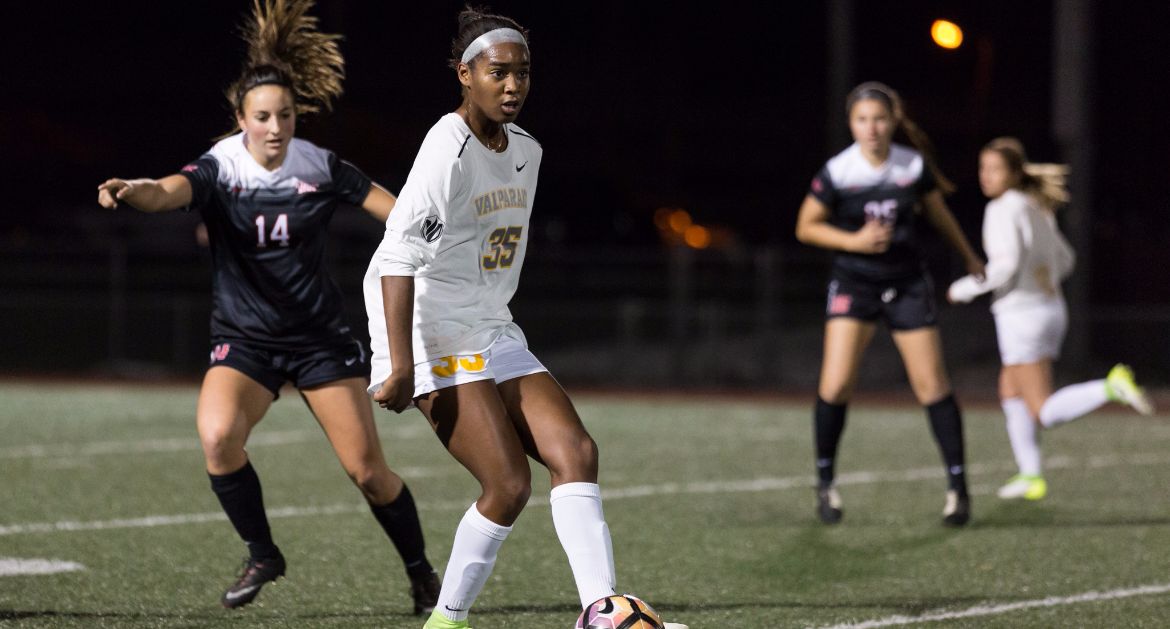 This Week in Crusader Soccer: Having already secured a spot in the Missouri Valley Conference tournament, the Valparaiso University women's soccer team fights for a tournament seed in the regular season finale Thursday afternoon against Evansville. If the Crusaders move up into the third or fourth seed, they would host a first-round tournament match on Sunday afternoon at Brown Field.

Previously: Valpo split a pair of matches in MVC action last weekend. The Crusaders fell 1-0 in mid-week action to Illinois State, but rebounded with a 2-1 victory Sunday afternoon at Indiana State to clinch a tournament berth. Cory Griffith and Grace Rogers tied Valpo career records in the win over the Sycamores.

Looking Ahead: The MVC tournament opens on campus sites this Sunday, Oct. 29 before moving to Missouri State for the semifinals (Nov. 3) and the championship match (Nov. 5).

Following the Crusaders: Thursday's match will be braodcast live on WVUR (95.1 FM, Valparaiso). Links for the live audio, as well as live stats, will be available via ValpoAthletics.com.

Series Notes: Evansville holds an 8-2-2 record in the all-time series against the Crusaders, but the first six matchups came in the first six years of the Valpo program. In the six most recent matchups, dating from 2004 to 2014, the series is even at 2-2-2. The squads' last matchup came on Sept. 14, 2014 on Brown Field, a scoreless draw.

Scouting the Opposition: Evansville enters Thursday's match at 5-11-0 on the year and 1-5-0 in MVC play, most recently falling to Missouri State by a 2-1 final. Montana Portenier has scored a team-best five goals on the year and also owns two assists, while Michaela Till has seen the majority of action in goal and owns a 2.08 GAA.

Simultaneous Fixtures: In the vein of similar scheduling from the Premier League and other leagues from around the world, the Missouri Valley Conference schedules each of its matches on the final match day of the regular season to begin simultaneously, so as not to grant an advantage to any team by way of knowing others' results. All four Valley matches Thursday afternoon will kick off at 4 p.m. CT.

Approaching Double Figures: Valpo's 2-1 win Sunday at Indiana State was the Crusaders' ninth of the year, leaving them just one victory shy of the 10-win milestone. Should Valpo reach double digits in wins, it would be the 10th season in program history with 10 or more victories.

Success on the Road: The Crusaders entered MVC play on Sept. 23 with a 1-5-0 record away from home in non-conference action. But Valpo turned things around on the road in conference play, going 3-1-0 away from home with wins at Missouri State, at Loyola and at Indiana State.

Rogers Ties Assists Mark: Senior defender Grace Rogers played all 180 minutes on the back line over both matches last week for the Crusaders and stepped up when called upon offensively, delivering a free kick into the box Sunday at Indiana State which Cory Griffith headed home for the game's first goal. For Rogers, it was her 13th career assist, tying Valpo's career record in the category. Rogers now is tied for team-high honors with five assists this season – her personal best, tied for third in a single season in Crusader history and just one off the Valpo single-season record.

Another Day, Another Brace: Junior forward Cory Griffith scored both Crusader goals in Valpo's win at Indiana State on Sunday, tying her own program single-season record for match-winning goals (5) and matching the Crusader career record for game-winners as well (10). Griffith now owns nine goals on the year, tied for sixth-most in a single season in program history. She also now ranks fifth on the Crusaders’ career charts with 19 career goals, just one shy of fourth position and two out of third place. The multi-goal game was the fifth of her career, as Griffith has tallied one hat trick and four braces.

Helping Out: In the first 24 years of Crusader women's soccer, there had been only 19 times when a player tallied four or more assists in a single season. But this year's squad features four players with at least four helpers. Sydney Griffin and Grace Rogers lead the way with five assists apiece - just one off the Valpo single-season record - while Keegan Maris and Natalia Kontul own four assists each as well. As a team, Valpo has tallied 28 assists on its 26 goals this year, just one away from its team single-season record of 29, set in 2005.

Consistency In the Back: Four Crusaders have started every match this season, including three of Valpo's backs - Sydney Gountounas, Natalia Kontul and Ali Quillen. All three have played at least 1300 minutes, with Quillen playing a team-high 1457 of the Crusaders' 1537 total minutes this season. Gountounas has started 30 consecutive matches, while Quillen has been a member of the starting XI in each of the first 36 matches of her Crusader career.

Reaching A Milestone: The Crusaders celebrate a quarter-century of competition this fall, as the 2017 campaign is Valpo's 25th season of intercollegiate women's soccer. The Crusaders first took the field on Sept. 4, 1993 at Michigan State.

Valpo In The Valley: The 2017-18 school year is also a significant season for the Valpo athletics department as a whole, as on July 1, Valparaiso University became a member of the Missouri Valley Conference following a decade of membership in the Horizon League. The move to The Valley dovetails nicely with the soccer program's 25-year celebration, as the MVC is celebrating 25 years of women's competition in the conference as well. The women's soccer team is the only program at Valpo to have previously competed in The Valley, as the Crusaders were an affiliate member of the conference from 1996 through 1998. The highlight of the Crusaders' previous tenure in the conference was the play of goalkeeper Amy Cavanaugh, who set a school and conference record which still stands today with 224 saves during the 1997 season.

Crusaders Picked Fifth in Preseason Poll: Valpo has been chosen to finish in a tie for fifth place in the MVC preseason poll, as voted on by the conference’s head coaches. The Crusaders totaled 29 points in the preseason polling to tie UNI for fifth place. Illinois State received all but one first-place vote to top the poll, while Drake picked up the other first-place nod and was second in the polling.

Experience Returns: Among the 18 letterwinners back for the Crusaders in 2017 are eight of last season's 11 most regular starters. The team features plenty of new blood as well, however, as nine players are in their first season at Valpo - seven freshmen and two transfers.