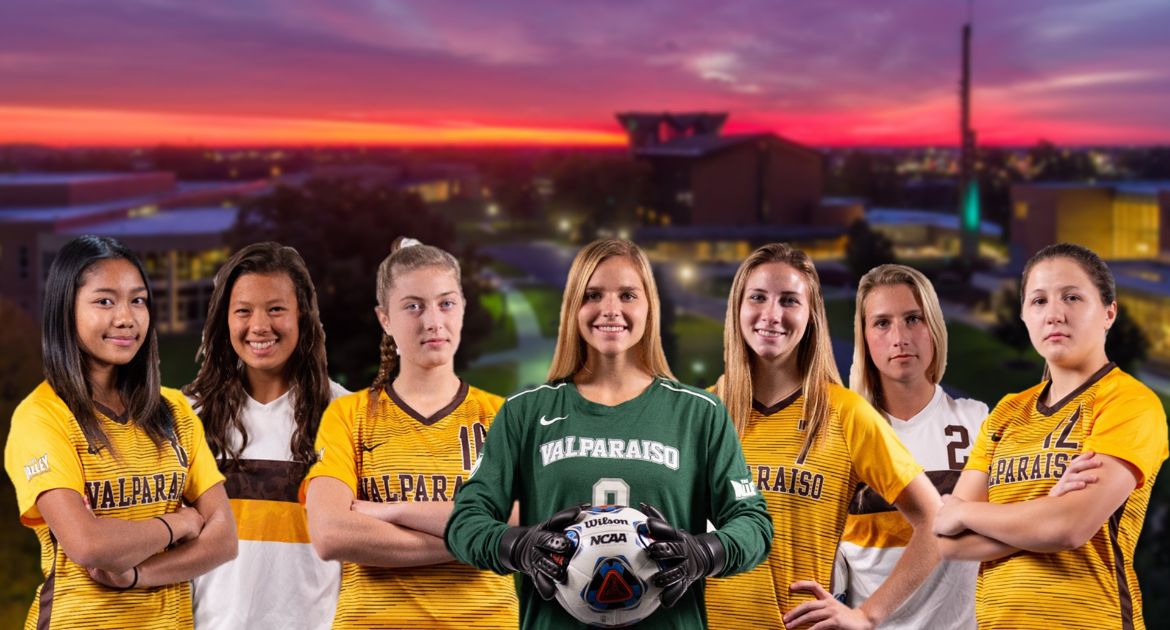 The Valparaiso University women’s soccer team has added another strong class to its program, as head coach John Marovich announced on Thursday that seven high school seniors have signed National Letters of Intent to join the Valpo program as freshmen for the 2019 season.

“We are very excited to welcome these seven outstanding young women to our Valparaiso soccer family,” said Marovich. “It was a so much fun recruiting this class as they all have an outgoing personality, passion for soccer, strong club experiences and a desire to pursue excellence. The makeup of this class brings players from seven different states, including our first player from Pennsylvania as well as players from Texas and Iowa for the first time in several years. I’m also excited for the local soccer fan as we have a couple of players that come from the greater Northwest Indiana area. These players understand our "Ring the Bell" program culture and each bring a unique skill set which fits into our playing model. My staff and I are looking forward to working with this group and our current talented roster to pursue an exciting and successful 2019 season.”

Graf was a Second Team All-State selection as a sophomore and an Honorable Mention All-State honoree as a freshman, earning First Team All-Conference, All-Region and All-District recognition both years. She then decided to pursue club soccer year-round her final two years of high school as a member of the Midwest United FC team competing in the US Development Academy league.

Marovich on Graf: “Natalie brings a strong and physical presence to the midfield. She helps develop rhythm in possession with her vision to recognize space, either by swinging the ball or taking a more direct pass to put opposing defense under pressure. I look forward to her commitment to communication with her teammates on the pitch to maintain both attacking and defensive shape.”

Schuh played just one season of high school soccer, leading Lake Central to a sectional championship as a senior while earning All-District and All-Conference honors. She spent the previous years playing for Sockers FC on their ECNL team in Chicago, a team which competes in one of the top leagues in the country.

Marovich on Schuh: “Daena has a great mind for the tactical part of the game, especially in the attacking third of the field. This mindset allows her to play in several positions on the field: outside back, midfield and even as a wide front runner. Daena will fit in well with our current roster and comes from the same high school as Lori Moore, our all-time leading goal scorer.”

Dugan earned All-State honors and was also an All-Section and All-Conference choice while leading Penn-Trafford to section and conference titles. She was a major contributor to her Century V club team, helping them win a USYS Region 1 championship and earn a spot in the 2019 USYS National Championship bracket.  Kiley also helped lead her club team to back-to-back PA West State Championships in 2017 and 2018.

Marovich on Dugan: “Kiley is a dynamic attacking player who can attack off the dribble, shoot from distance and finish with her head in the box. Her pace and athleticism will add a great attacking presence to our front line. Kiley's experiences at the club level and winning championships display her relentless work ethic to create chances and score goals.”

Norfolk was selected by ECNL as a 2018/2019 Midwest Conference Player to Watch. She was selected to the 2017 ECNL Midwest Region PDP team (Player Development Program). The FC Wisconsin Director of Coaching recognized her character and named Norfolk to the club’s leadership group the past three years.

Marovich on Norfolk: “Nicole is a strong 1-v-1 defender with an outstanding ability to read the game by stepping and winning challenges. Her ability to take the next step in connecting passes in possession out of the back effectively is what takes her game to the next level.”

Marovich on Park: “Elizabeth has a great feel about finding the best times to get forward from an outside back position. She has a real attacking mindset in the final third, whether it’s attacking the end line or sending an early service in behind the back line. Her pace and attacking skill set will add to our team and fits well into our playing model.”

Henkel was a member of the South Texas ODP teams in her age groups and invited into the Region 3 ODP camp. She led her Challenge SC ECNL team to a Texas conference championship with a record of 14 wins, two ties and just one loss. Henkel has been selected to attend Dynasty Goalkeeping camps in the past and has been invited for the Dynasty Goalkeeping "Pro Week" for elite collegiate goalkeepers for the summer of 2019.

Marovich on Henkel: “Georgia is an athletic and technical goalkeeper who has great range in the goal. She has strong feet, commanding voice and is strong in getting and holding crosses. We are excited that she will be enrolling in classes starting this January to get a head start in her training and development.”

Welch did not play high school soccer, instead choosing to focus her energy on playing club for Chicago Inter SC.

Marovich on Welch: “Cierra is a strong finisher and a strong attacking presence. She has the ability to sit as a target forward or play underneath and attack at a back line. Her versatility, soccer intelligence and athleticism will bring another dynamic personality to the attacking third of the field. Cierra has the confidence of a goal scorer and the fight of a central defender, which creates problems for any defending block.”