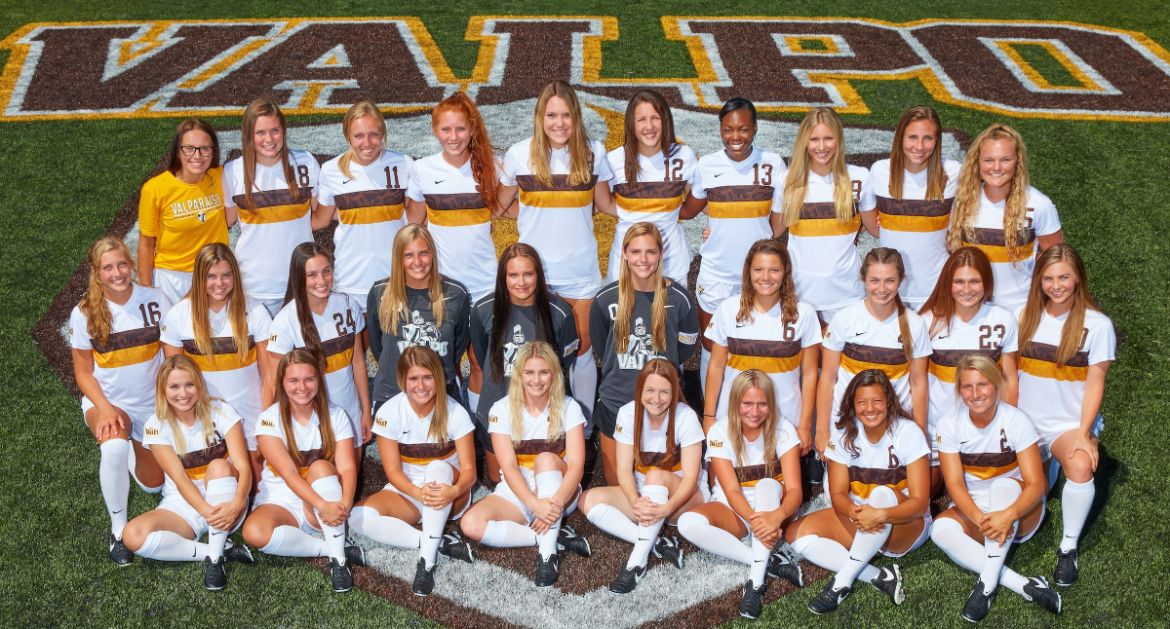 This Week in Valpo Soccer: The 27th season of Valparaiso University women’s soccer kicks off at Brown Field this weekend with a pair of home matches. Valpo opens the 2019 campaign on Friday night as it hosts Green Bay, and then turns around Sunday afternoon and welcomes Oakland to campus.

Previously: Valpo dropped a pair of exhibition matches during the preseason, falling 1-0 at Miami (Ohio) and 4-0 at Western Michigan.

Looking Ahead: The first regular season road match of the season comes next Friday evening at Bowling Green, and the second weekend of the season will close at Brown Field next Sunday afternoon versus Wright State.

Following the Brown and Gold: Both of this weekend’s matches will be broadcast live via The Valley on ESPN, with Friday night’s match carried on ESPN+ and Sunday afternoon’s match on ESPN3. In all, seven of Valpo’s eight home matches this year will be broadcast on The Valley on ESPN. Live stats will be available as well, with links for all the live coverage available via ValpoAthletics.com.

Head Coach John Marovich: Entering his 12th season at the helm of the Brown and Gold, John Marovich holds a 96-80-30 (.539) record both overall and at Valpo as a head coach. The 2014 Horizon League Coach of the Year, Marovich holds Valpo’s all-time records for both victories and winning percentage.

Series Notes: Green Bay - Valpo holds a 10-8-3 advantage in the all-time series with the Phoenix, but it’s been a tale of two series. Green Bay won the first eight meetings from 1993 through 2001, but Valpo is unbeaten in the last 13 matchups (10-0-3), including five straight victories. Last season, in their first non-conference matchup since 2001, Valpo earned a 2-1 road victory, winning on an 83rd minute goal from Ava Porlier.

Oakland - The Golden Grizzlies hold an 11-5-1 advantage in the all-time series with Valpo. Valpo won three of the last four meetings (2004-2006) when the two sides were both in the Mid-Con, but Oakland went 4-1-0 against Valpo from 2013-2016 with both programs in the Horizon League. The last meeting came in the first round of the Horizon League Tournament on Oct. 31, 2016, a 3-2 Oakland victory in Rochester. Maria Broecker closed out her freshman year with a two-goal effort in that contest.

Valpo in the Openers: Valpo will look to extend its winning streak in season openers to three straight seasons on Friday, as the Crusaders have earned season-opening wins each of the last two years. Overall under Marovich, Valpo is 6-5-0 in season openers. Valpo is also 6-5-0 in Marovich’s tenure in its home openers as well.

Iron Woman: Senior defender Ali Quillen went the entirety of the 2018 campaign without coming off the park, starting all 16 matches and playing all 1,508 minutes. She became the first Valpo player to not come off the field for an entire season since Sydney Galvez-Daley played all 1,892 minutes between the posts for Valpo in its 2014 Horizon League championship season. The last Valpo field player to not sub out for an entire year was Janine Lytle in 2012, who played 1,772 minutes that season. Quillen has now gone the distance in 50 of 54 career matches, starting all 54, and is currently on a streak of 2,145 consecutive minutes played dating back to Sept. 28, 2017 against Chicago State. She is nearing her personal-best streak of 2,175 consecutive matches which spanned her freshman and sophomore seasons (Aug. 28, 2016 at Loyola-Sept. 15, 2017 at Western Michigan), as well as Lytle’s streak of 2,192 consecutive minutes which started at Butler Oct. 19, 2011 and came to a close with the final match of her career in 2012.

Gesell in Goal: Junior Kezia Gesell looks to take another step forward at goalkeeper this year for Valpo. After seeing part-time action in her first season and a half, Gesell became Coach Marovich’s regular selection in goal during MVC play last year, starting six of seven Valley matches. She ranked fifth in the Valley in MVC-only action in GAA and save percentage, and finished the season with a 1.26 cumulative GAA and a .764 save percentage.