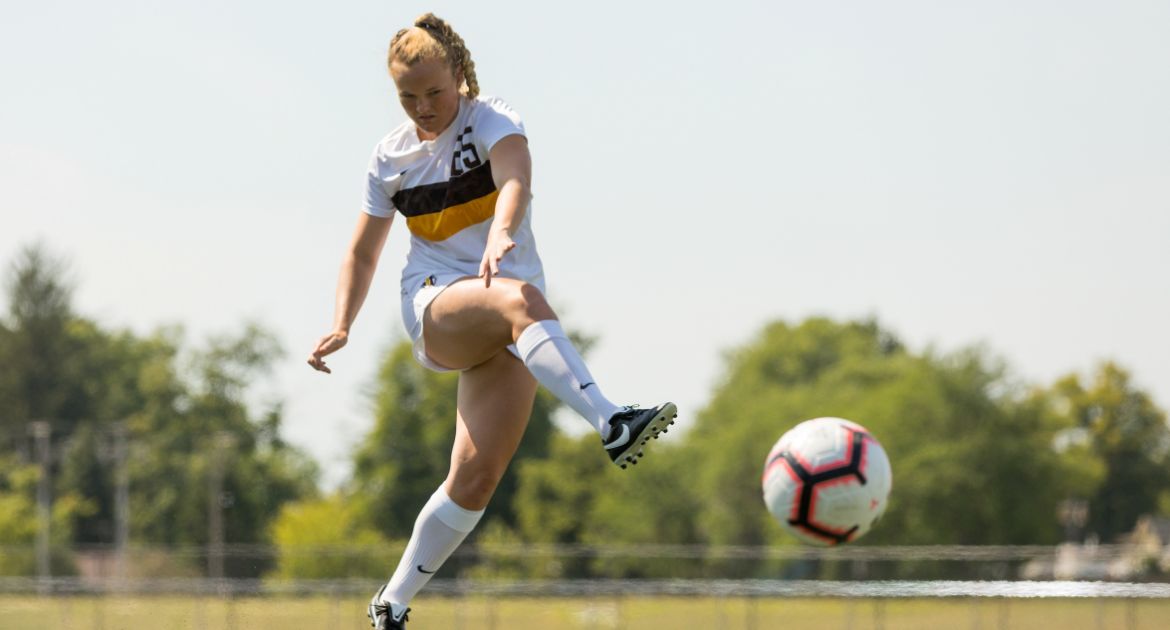 This Week in Valpo Soccer: The Valpo women’s soccer team faces a pair of tests this week in MVC play, hitting the road to take on MVC co-leader Loyola in Chicago Wednesday night before returning home to host Evansville on Sunday afternoon.

Previously: Valpo held one of the nation’s prolific offenses at bay deep into the second half of Saturday night’s match at Brown Field, but an 80th-minute goal was the difference maker as Illinois State closed the night with a 1-0 win over the Brown and Gold.

Looking Ahead: Valpo plays its final road match of the regular season on Saturday, Oct. 26 when it makes the trip to Des Moines to take on Drake.

Following the Brown and Gold: Both of this week’s matches will be streamed live on ESPN+. Live stats for both will also be available via ValpoAthletics.com.

Head Coach John Marovich: In his 12th season at the helm of the Brown and Gold, John Marovich holds a 96-92-31 (.509) record both overall and at Valpo as a head coach. The 2014 Horizon League Coach of the Year, Marovich holds Valpo’s all-time records for both victories and winning percentage.

Series Notes: Loyola - Valpo’s most common opponent in program history, the Brown and Gold holds a 9-17-1 all-time record against the Ramblers. Valpo had won four in a row in the series from 2014 through 2017, but Loyola captured the meeting in the 2017 MVC Tournament and then won last year’s regular season matchup on Brown Field, 2-0.

Evansville - Valpo is just 2-9-2 all-time against the Purple Aces. Evansville has captured both meetings since Valpo joined the MVC, winning 2-1 on Brown Field in 2017 and 1-0 in Evansville in 2018.

Scouting the Opposition: Loyola - The Ramblers enter Wednesday night’s contest tied atop the MVC standings with wins in each of their first three conference games, and own an 8-4-1 overall record, having won six straight matches in all. 10 different players have combined for the Ramblers’ 22 goals, led by five apiece from Megan Nemec and Aleksa Tataryn. Grace Droessler has seen the majoriy of minutes in goal and is 5-3-1 with a 1.38 GAA.

Evansville - The Purple Aces come into the week with a 1-9-2 overall record and are 0-2-1 in MVC play, with a match at Missouri State on the docket before Sunday’s contest. Evansville has scored just seven goals this year and has not found the back of the net since Sept. 13. Michaela Till has played all but 23 minutes in goal and owns a 1.97 GAA and a .739 save percentage.

Strong Saves From Kez: Junior goalkeeper Kezia Gesell posted one of the top save totals in her career to help keep Valpo in last Saturday’s match against Illinois State. Facing a Redbird offense which entered the match among the top-20 in the nation in scoring offense, Gesell made 10 saves and surrendered just one goal - this after the Redbirds had netted eight goals in their first two MVC matches. Gesell’s 10 saves matched an MVC single-match high this year and are the most to date in a conference match. It is the second time in her career Gesell has registered a double-figure save total, trailing just the 12 stops she made last year, coincidentally also against Illinois State.

On the Verge: Yet again, Valpo fell by just one goal in the loss to Illinois State. All three of the Crusaders’ losses in MVC play this season have been one-goal decisions, and Valpo has dropped seven matches overall this year by one tally. The 1-0 loss to the Redbirds marked the fifth time Valpo has been on the wrong end of a 1-0 final this year, tying the 2012 squad for most 1-0 losses in a single season in program history.

Torhorst Tallies Two: Junior Lauren Torhorst registered the first brace of her career in Valpo’s match at Indiana State, twice leveling the match in the second half with goals in the 46th and 53rd minutes. She became the first Valpo player since Cory Griffith in last season’s finale, ironically also versus Indiana State, to register a multi-goal game. For Torhorst, it doubled her career output, as she had entered the match with two career goals, the last of which had come way back on Sept. 30, 2017.

Noel Adds to Her Tally: Redshirt junior forward Tahelah Noel notched Valpo’s goal to open MVC play at Missouri State, a goal in the 25th minute that gave the Brown and Gold a lead they would hold for over 43 minutes. For Noel, it was her third career goal, but her first goal in a span of 757 days. Noel’s previous two tallies came just 12 days apart in her sophomore season, on Aug. 20 and Sept. 1 of 2017.

The Youth in the Side: Valpo has featured an extremely young side through the entirety of this season, starting with the season opener, where the Brown and Gold featured five freshmen in the starting XI. Five freshmen starters marked the most for a Valpo women’s soccer team in a season opener since at least 1998. To date, Valpo has started at least four freshmen, with most matches featuring at least five rookies and seven underclassmen. The youngest starting XI to date came in the fixture at St. Bonaventure, when Valpo started six freshmen and three sophomores.