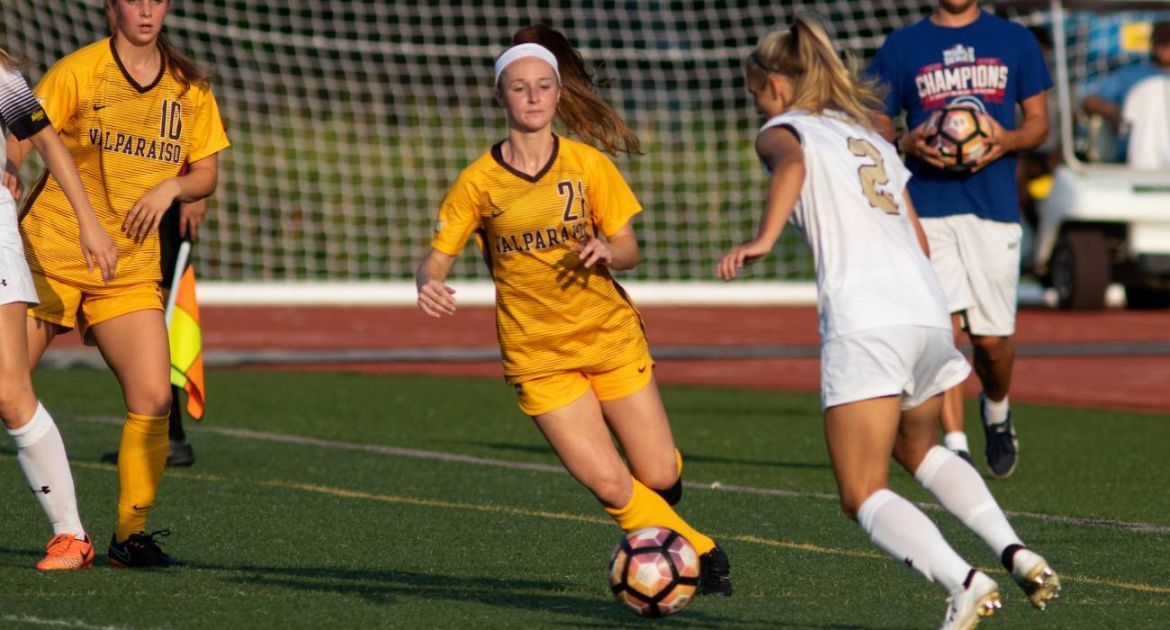 Valpo women’s soccer senior Keegan Maris (Batavia, Ill./Batavia) was recognized by the Missouri Valley Conference on Wednesday as a featured student-athlete in the latest edition of the conference’s Scholar-Athlete Spotlight.

Maris currently holds a perfect 4.00 cumulative GPA as a nursing major, following in the footsteps of many past student-athletes who have graduated from Valpo’s College of Nursing and Health Professions. Maris has received numerous accolades for her academic achievements, including most recently earning the Valpo Dean’s Award last year, which is presented to the student-athlete with the highest cumulative GPA in each of Valpo’s colleges. She also twice earned the Valpo Outstanding Student-Athlete award, awarded to non-senior student-athletes with at least a 3.9 GPA, and has received Valpo Presidential Academic Honors each year eligible.

On the conference level, Maris was the recipient of the MVC President’s Council Academic Excellence Award last year, an honor bestowed on student-athletes who own a minimum 3.8 cumulative GPA, have participated in athletics at least two years, and are within 18 hours of graduation. Each of the last two years, Maris has received the MVC Commissioner’s Academic Excellence Award. She has also qualified for the MVC Academic Honor Roll each of the last three years.

Outside the classroom, Maris is involved with a number of campus activities. She is a member of the Undergraduate Nursing Research Team, which conducts research projects with oversight from faculty members. The team is currently studying the prevalence of vaping on college campuses, while Maris was also previously involved in a project researching the impact of caregiver burden for those caring for loved ones with dementia. She is also a member of the Campus Judicial Board, which reviews allegations of serious policy violations on campus to ensure the standards of the University are being maintained.

Maris is also an active participant in Valpo’s Fraternity & Sorority Life as a member of the Pi Beta Phi sorority. She is the sorority’s Director of Membership Selection, and is heavily involved with their activism as well. Maris is the Champions-Are-Readers Chair of the sorority, aiding in setting up their annual Mr. Pi Phi philanthropy event. The event raises money for Read > Lead > Achieve, the sorority’s philanthropy which raises awareness of children’s literacy rates and fundraises money for the cause.