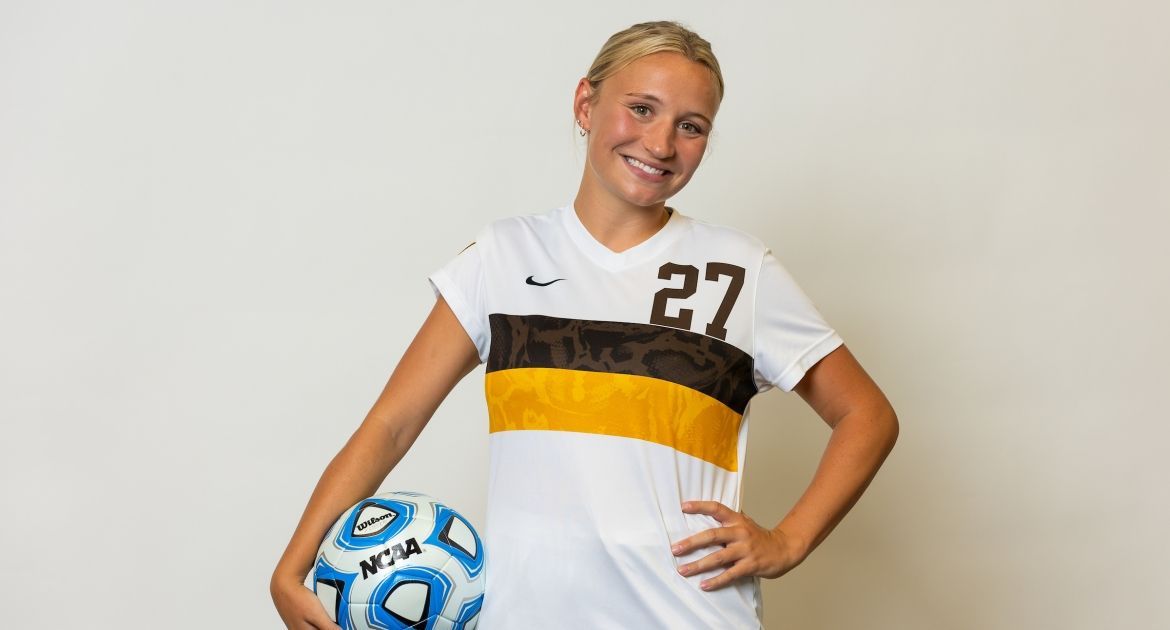 Next Up in Valpo Soccer: Winners of four in a row, the Valpo soccer team takes aim at a fifth consecutive victory and the continuation of its perfect start to Missouri Valley Conference play on Sunday afternoon as the Beacons play at Missouri State. Sunday’s match marks the midway point of the conference schedule.

Previously: A strong run of recent form from Valpo soccer freshman Dana Fish continued on Wednesday night at Brown Field, as the rookie hit the back of the net in the 75th minute to break a scoreless tie for the eventual match-winning goal in the Beacons’ 2-0 victory over Southern Illinois. Kelsie James added a penalty kick in the 89th minute and Nikki Coryell made five saves for the shutout.

Looking Ahead: The Beacons return home for Senior Night next Saturday evening, Oct. 9, against Cornell College. The Valley slate resumes on Oct. 13 at Drake.

Following the Beacons: Sunday’s match will be broadcast live on ESPN+ and will have live stats available via ValpoAthletics.com. All remaining home matches and select road matches will be carried live on The Valley on ESPN.

Head Coach John Marovich: In his 14th season at the helm of the Valpo program, John Marovich holds a 109-103-37 (.512) record both overall and at Valpo as a head coach. The 2014 Horizon League Coach of the Year, Marovich holds Valpo’s all-time records for both victories and winning percentage.

Series Notes: The Bears hold a 4-2-1 advantage in the all-time series and are 3-1-0 in Springfield. This past spring, Valpo won a 2-1 decision over Missouri State on Brown Field in the last meeting between the two programs, with Lindsey DuSatko and Kelsie James finding the back of the net.

Scouting the Opposition: MSU enters Sunday’s match with a 4-4-3 record this season, including a 1-1-0 mark so far in Valley play, which includes a 1-0 defeat in extra time against Illinois State last time out. Nine different players have combined to score 12 goals for the Bears, with Grace O’Keefe owning a team-high 10 points (2g, 6a). Katherine Montgomery has seen the vast majority of time in goal for MSU and owns a 0.84 GAA.

Nine Points From Three Three Matches: With wins over Illinois State, Indiana State and Southern Illinois in its first three MVC fixtures of the season, Valpo has claimed all nine possible points. It is the first time the program has started conference play with wins in each of its first three matches since the 2014 Horizon League season, when it went on to post a perfect 8-0-0 mark in league play. Perhaps most impressively, two of the three wins (ILS, INS) have come against two of the three sides picked ahead of the Beacons in the preseason poll.

WWWW: The win over Southern Illinois was Valpo’s fourth consecutive victory, giving the program its first four-match winning streak since the 2014 campaign, when it won 12 in a row as part of the best season in program history. It is just the third time in head coach John Marovich’s tenure that the program has won four or more consecutive matches, as the 2009 side won seven straight late in the season.

Four Straight Clean Sheets: The 2014 season also boasts the last time before this year Valpo registered four straight clean sheets, as that year’s squad blanked Northern Arizona, Western Illinois, IPFW and Evansville in succession in early-season action. You have to go back to 2009 to find the last time Valpo won four in a row, all in shutout fashion — that season saw the Brown and Gold hold five straight opponents scoreless in wins late in the season: Youngstown State, Cleveland State, Butler, IPFW and Green Bay. The Beacons carry a 376-minute shutout streak into Springfield on Sunday.

Winning Late: Each of their first three wins of the Valley schedule have seen the Beacons score the eventual match-winner late on. The winner against Illinois State came in the 83rd minute, the victory at Indiana State took until the 95th minute and the game-winner versus Southern Illinois found the net in the 75th minute. Valpo was never threatened late in any of the three victories, as it did not surrender a shot attempt following the match-winner against either Illinois State or Southern Illinois, while Indiana State had just one shot attempt in the 24 minutes leading up to Valpo’s golden goal.

Fish’s Run of Form: After playing in just three of Valpo’s first six matches of the season for a total of 29 minutes, freshman Dana Fish worked her way into the rotation up front and is currently on a tremendous run of form. In the last four matches, Fish has scored her first career goal against Chicago State, scored the match-winner against Illinois State, assisted on the golden goal at Indiana State and scored the game-winning goal versus Southern Illinois. Fish is the only player in the conference with two game-winners through the first three match days of the Valley slate.

James Adds to Her Account: Sophomore Kelsie James knocked home her team-high fifth goal of the game on the insurance penalty in the win over SIU. James, who now has eight goals and five assists in one-and-a-half seasons in the Valpo uniform, leads all MVC players in shots and shots on goal, is tied for the conference lead in goals and ranks second with 13 points.

A Season of Firsts: In her 55th career match in the Brown and Gold, senior Morgen Metzger delivered the pass for the assist on Fish’s match-winner against SIU - her first career assist. That continues a trend for the Beacons this season, as six of Valpo’s eight goal scorers entered the year without a collegiate goal, while six of nine players who have tallied an assist did so for the first time.

DuSatko Does It Again: At this rate, sophomore Lindsey DuSatko is going to end up on Terre Haute’s Most Wanted list. For the second time in as many matches at Indiana State, DuSatko came up with a match-winning goal in extra time of a 1-0 victory - the first time coming in this past spring’s MVC Tournament semifinal match. DuSatko now owns three career goals in as many matches against the Sycamores.

Earning Honors: DuSatko was recognized as the MVC Player of the Week for her match-winner at Indiana State, but she wasn’t the only Beacon to earn weekly honors, as junior Nicole Norfolk was named MVC Defensive Player of the Week after helping to limit the Sycamores to four shot attempts over 95 minutes and earning the secondary assist on DuSatko’s goal. Valpo has now had five different players receive weekly awards from the MVC this season - sophomore Kelsie James previously earned the Player of the Week honor, while rookies Dana Fish and Abby White have been named the MVC Freshman of the Week.

Always in the XI: Three players have started each of the season’s first 11 matches: Kiley Dugan, Nicole Norfolk and Abby White. In their third season in the Valpo uniform, Dugan and Norfolk have both started all 43 matches since stepping on campus.