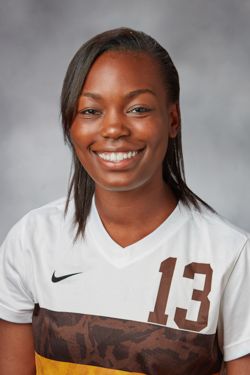 2019: Returned to action as she appeared in 16 matches, making nine starts ... played a total of 735 minutes ... scored a goal in MVC play at Missouri State ... finished season with seven shot attempts, three on goal.

2017: Played in 15 matches as a sophomore, starting on 14 occasions ... played a total of 973 minutes on the season ... scored first career goal in her season debut against IUPUI Aug. 20, netting an insurance tally in the Crusaders' win ... found the back of the net in victory over Eastern Illinois Sept. 1 as well, scoring in the 89th minute to force extra time - the latest goal to send a game to overtime by a Crusader player in program history ... finished season with 21 shot attempts, nine of which were on goal.

2016: Appeared in all 19 matches in her first season at Valpo, starting four times ... earned starting nod in each of season's final three games ... picked up first career point Oct. 19 at UIC, assisting on goal in Horizon League win ... recorded seven shot attempts on the year, including two on goal.

Prep: A five-year letterwinner for the Crusaders ... finished career as top goal-scorer in program history ... led all of Western New York in 2015, scoring 56 goals as a senior ... a three-time conference MVP and a member of the All-Western New York team in 2015 ... a six-year ODP member, Noel led her Western New York team to the Region I ODP Championship in 2015 by scoring more goals than any other players participating in the Championships ... played club soccer most recently for Rochester Futbol Club after spending several years with Empire.

Personal: Daughter of Rubins and Edeline Noel ... undecided upon major.