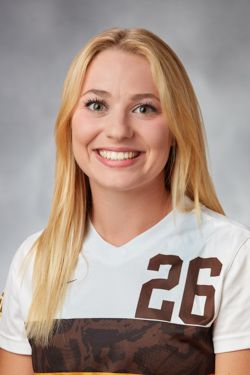 2018: Saw action in all 16 matches in her junior year, starting 11 times ... played a total of 1,030 minutes on the season, going the distance twice ... recorded a pair of assists in MVC play, helping on Valpo's lone goal in a draw with Missouri State Oct. 13 and assisting on Valpo's first goal in a win over Indiana State Oct. 25 ... one of just 10 players with multiple assists within MVC-only play on the year ... finished the season with 13 shot attempts, seven of which were on goal.

2017: Saw action in 16 matches for Valpo as a sophomore, starting three times ... played a total of 410 minutes on the season, including a season-high 67 minutes in season opener against Grace Aug. 18 ... registered first career assist on insurance tally in win at Fort Wayne Sept. 10 ... picked up another assist on Oct. 22 in MVC win at Indiana State, recording primary assist on 86th-minute match-winner ... totaled six shots on the year, three of which were on goal.

2016: Made 10 appearances off the bench in her rookie season with the Crusaders ... played total of 209 minutes on the year ... tallied first two career goals in Horizon League Championship action at Oakland Oct. 31 ... pair of goals against the Golden Grizzlies came on her only two shot attempts of the season.

Prep: A four-year letterwinner for the Falcons ... earned Honorable Mention All-District honors and helped Rochester H.S. to district and regional titles in 2013 ... played club soccer for WAZA 98 Juniors, which was two-time MRL champions (2012, 2015), 2014 State Cup champions and Disney Showcase finalists in both 2014 and 2015 ... also lettered once in volleyball ... member of National Honor Society.