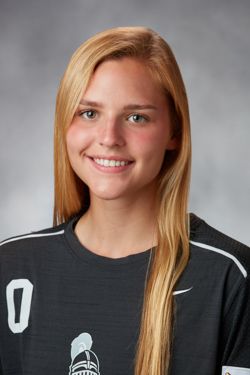 2019: Made 12 starts in goal as a rookie for Valpo ... posted a 1.51 goals against average and a .700 save percentage for the season ... ranked sixth in the MVC in GAA ... lowered GAA to an even 1.00 in three starts in MVC play ... made Valpo debut in season opener Aug. 23 against Green Bay, making three saves ... made season-high seven saves on two occasions: Aug. 30 at Bowling Green and Sept. 15 versus IUPUI ... picked up first career win with a clean sheet in MVC win over Evansville Oct. 20 ... kept a clean sheet in win in regular season finale versus UNI Nov. 1, making a pair of saves in helping Valpo secure an MVC Tournament berth.

Prep: Earned one varsity letter for the Spartans ... focused on club play ... member of the South Texas ODP teams in her age groups and invited into the Region 3 ODP camp in 2016 ... 2017 Technical Institute Player of the Month ... led her Challenge SC ECNL team to a Texas conference championship in 2017-18 with a record of 14 wins, two ties and just one loss ... selected to attend Dynasty Goalkeeping camps in the past and was invited to the Dynasty Goalkeeping "Pro Week" for elite collegiate goalkeepers in the summer of 2019 ... member of National Honor Society.