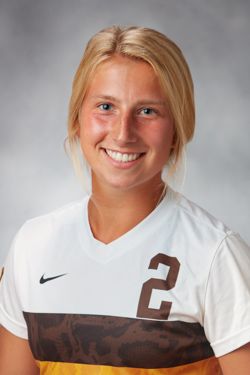 2019: Appeared in all 18 matches, starting 17 times, as a freshman for Valpo ... played a total of 1,555 minutes on the season ... netted two goals and tallied one assist ... ranked second on the team in points ... recorded first career point with an assist on the opening goal in draw with Wright State Sept. 1 ... found the back of the net in the 10th minute against IUPUI Sept. 15 to open the scoring ... recorded insurance goal in Nov. 1 win over UNI which secured MVC Tournament berth ... posted 14 total shot attempts, six of which were on goal.

Prep: A three-year letterwinner for the Gladiators ... a Second Team All-State selection as a sophomore after receiving Honorable Mention All-State honors as a freshman ... earned First Team All-Conference, All-Region and All-District recognition both years as well ... following sophomore year, decided to pursue club soccer year-round as a member of the Midwest United FC team competing in the US Development Academy league ... helped team to DA national title in 2019 ... also a member of the Michigan ODP.