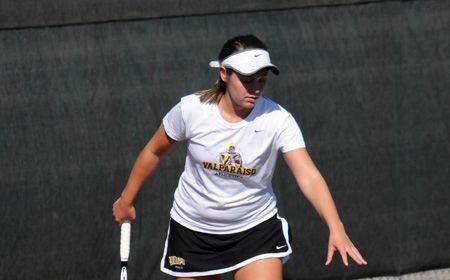 Valparaiso added another singles and doubles victory to its resume on Saturday afternoon as the Crusaders closed play at the Ball State Fall Invitational held at the Cardinal Creek Courts in Muncie, Ind.

Brittany O’Reilly (Green Bay, Wis./Southwest H.S.) posted a 6-1, 6-1 win over Georgia Lammers of Dayton in flight seven for her second singles win in as many tournaments.

Kristin Zakiewicz (Bristol, Ind./Northridge H.S.) and Angelina Goheen (Aurora, Ill./Rosary H.S.) added Valpo’s first doubles win of the season with an 8-3 triumph over Lammers and Victoria Marchant of Dayton in flight three.  The duo had dropped their first contest of the day to a team from IUPUI 8-4.

In other singles action on day two of the tournament, Barthels fell 6-1, 6-0 in flight one while Hamel retired in the second flight due to injury trailing 3-2 in the opening set.  York dropped a 6-2, 6-2 match in the third flight while Fredlake lost 6-2, 6-1 at number four.  Kammerer fell 6-4, 6-0 in the fifth flight.

Valparaiso will wrap up the fall schedule on Monday, Oct. 17 with a dual match against Robert Morris (Ill.).  First serve is set for 4 p.m. at the Valpo Tennis Complex.