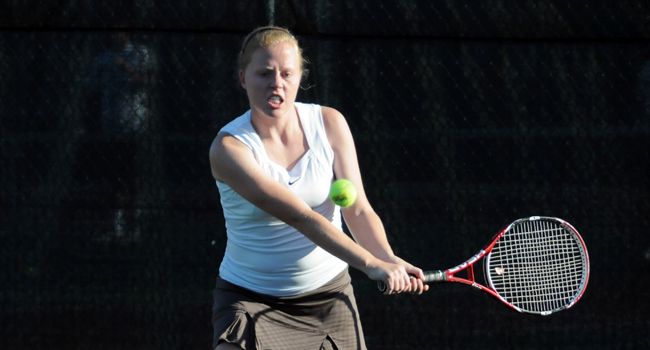 Stephanie York won in both singles and doubles on Wednesday for the Crusaders. (Ray Acevedo)
Related Links

Valparaiso’s women’s tennis team opened their spring break trip to California on Wednesday afternoon, defeating Biola 6-3 at the Biola Tennis Center in LaMirada, Calif. to return to the .500 mark on the season.

The Crusaders added four more straight sets victories in singles action.  Hamel was a 7-5, 6-4 winner over Thompson at number two while York blanked De Rojas 6-0, 6-0 at the third spot.  At fifth singles, Zakiewicz was a 6-0, 6-1 winner over Vogel while Lauren Kammerer (Valparaiso, Ind./Valparaiso H.S.) added a 6-2, 6-2 victory over Cobian at the sixth spot.  Bartels fell in three sets at the top of the order 6-1, 1-6, 6-4 against Pace while Fredlake fell at four 6-4, 6-2 against Thong.

Valparaiso (4-4) will return to the courts on Thursday afternoon, facing Point Loma Nazarene.  First serve is slated for 4 p.m. CDT.